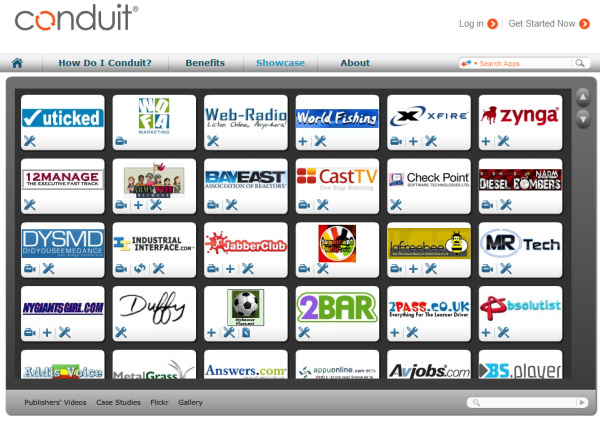 Conduit, a company that has found great success with its cross-browser Web application platform, announced support for Google Chrome today. Now publishers will be able to develop an application once for Conduit’s platform and have it work on Chrome and other major browsers (Internet Explorer, Firefox, and Safari). Conduit has also made thousands of Chrome-compatible apps available at its App Marketplace, making it the largest source outside Google for Chrome apps.

Google announced last month that Chrome hit 70 million users and held 6.73 percent of the browser market, so it’s no surprise that Conduit is eager to support it. Integrating into Chrome is easier now than it has been before as well, since the browser officially received Firefox-like extensions earlier this year. Conduit’s Chrome apps install just like Google’s extensions on the browser.

Web apps from Conduit’s platform can take many forms, but what they all share is the ability to integrate into your Web browser. Amazon, for example, has a Wish List app that allows you to add an item from any web page to your Wish List. Box.net’s app has even more functionality — it lets you add and share files through Box.net without visiting the site, or launching another application. The apps all run via Conduit’s engine, which is installed on your browser the first time you try to install one of its web apps. This allows browsers like Safari and Internet Explorer, which don’t have traditional extension capabilities, to run and manage the apps.

Judging from the growth Conduit has seen over the past two years, the Web app business has been booming. From May 2008 to March 2010, the company’s active users rose more than 500 percent (from under 20 million to over 100 million), and its revenue grew tenfold. From August 2009 to May this year, the amount of apps with more than 1 million active users rose from single digits to over 40. A recent Coca Cola Zero app was shown to over a million users within a day, and within ten days it reached more than 80 million people with nearly 1 million minutes of combined viewing time.

When I spoke to to Conduit President Adam Boyden, he mentioned that the company considers the built-in methods of adding applications into browsers as their biggest competitors. But until all browsers decide on a unified platform for apps (not likely anytime soon), Conduit will remain tempting to publishers with its ability to send a single app across multiple browsers.

The San Mateo, Calif.-based company was seed-funded by its founders and Zack Rinat, and received first-round funding from the Israeli venture group Yozma, which altogether totaled $1.5 million. Conduit received $8 million in second-round funding by Benchmark Capital, but hasn’t used those funds yet since it quickly found itself profitable.