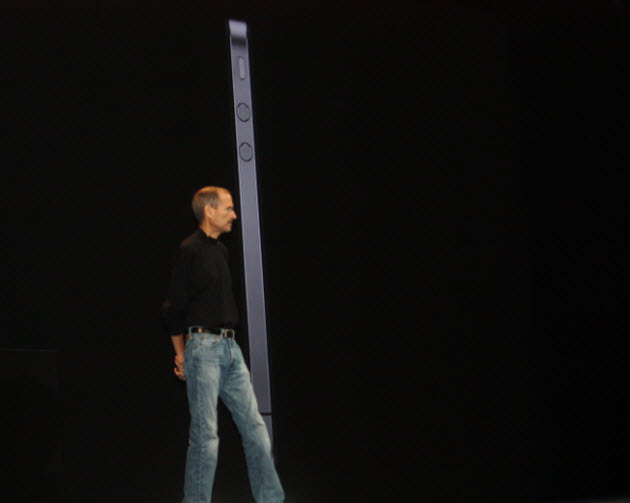 Who is the thinnest of them all? The 9.33 millimeter iPhone 4 or Apple chief executive Steve Jobs. 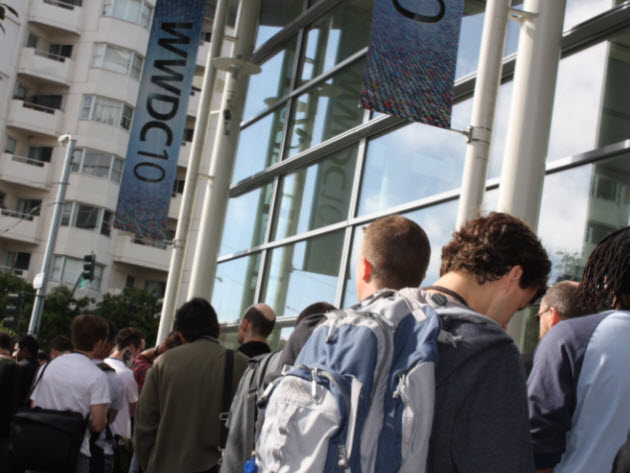 These folks were among the first in line, which meant they waited overnight to get their badges and the chance to hear Steve Jobs’ almighty voice. 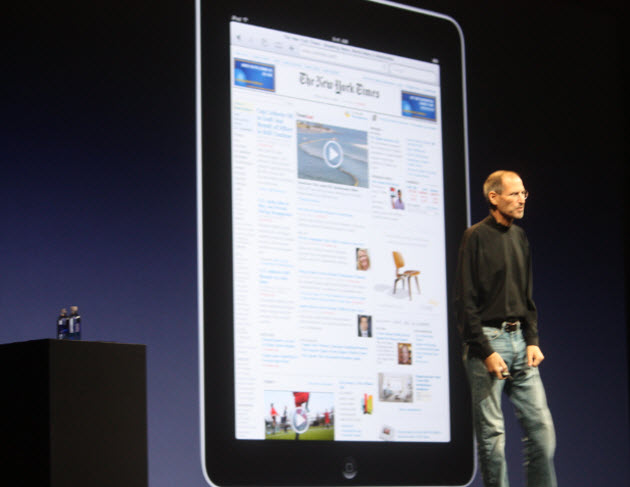 Steve Jobs started with the iPad. He said there were 8,500 native apps available and they have been downloaded more than 35 million times. Some 2 million iPads have sold in the first 59 days. It is now available in 10 countries. 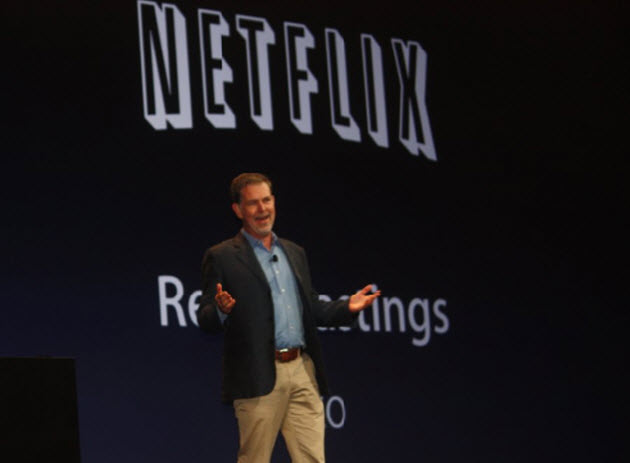 Reed Hastings, chief executive of Netflix, showed off his company’s upcoming free app for the iPhone. 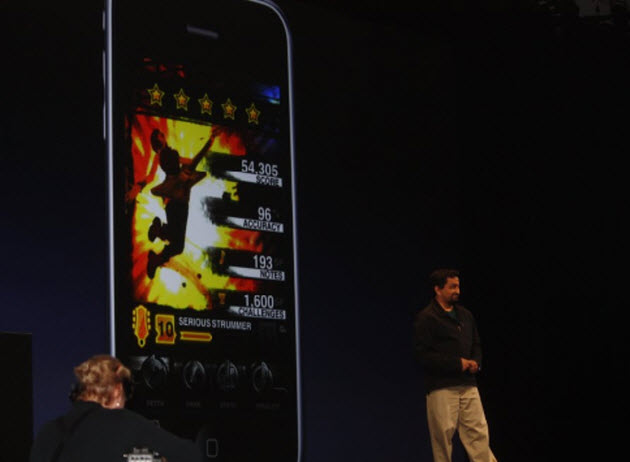 At long last, Guitar Hero is coming to the iPhone. Activision Blizzard senior vice president Karthik Bala shows off the app, which will compete with MTV’s Rock Band and Tapulous’ Tap Tap Revenge games. I’d like to know who will win this fight. 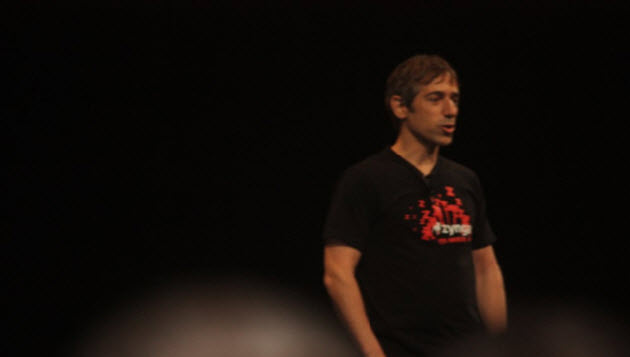 Mark Pincus, chief executive of Zynga, came out to show off FarmVille running on the iPhone. The game has 68 million monthly active users on Facebook. Now you can tend your crops even if you’re far from a computer. 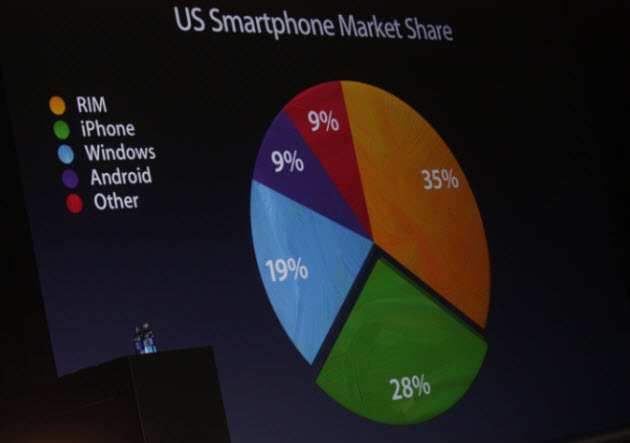 Steve Jobs said that Nielsen’s first quarter figures about U.S. sales of smartphones showed Apple is at 28 percent, more than 3 times the market share of Google Android phones. Of course, with overseas numbers thrown in, Android is bigger. 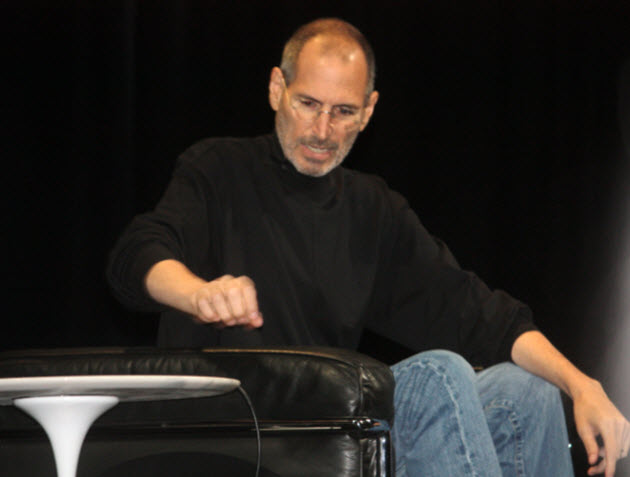 Jobs went through a long description of the iPhone 4’s new features. And then, with typical dramatic flair, he said, “One more thing….” 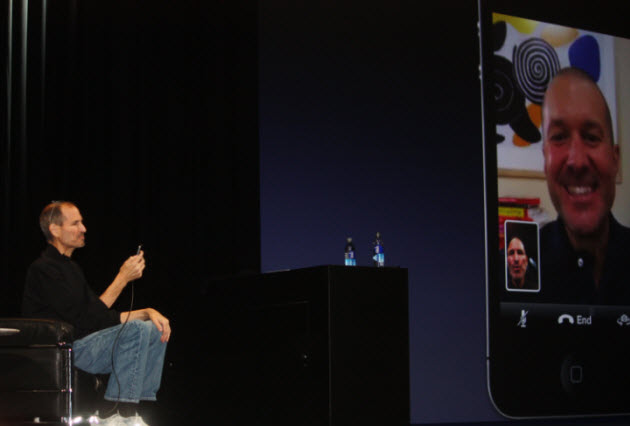 And that one more thing was FaceTime, Apple’s new video phone call feature on the iPhone 4. 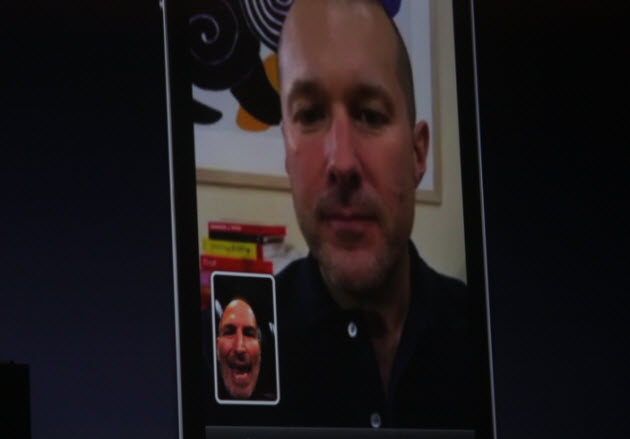 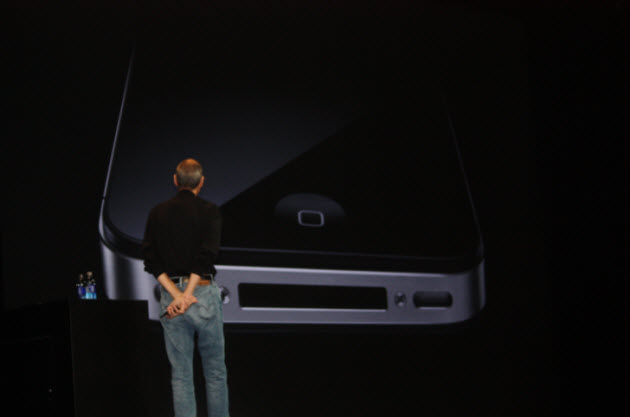 Yes, you can admire the iPhone 4 from any direction. Here you can see the stainless steel rim that serves as antennae for the iPhone’s various radios. 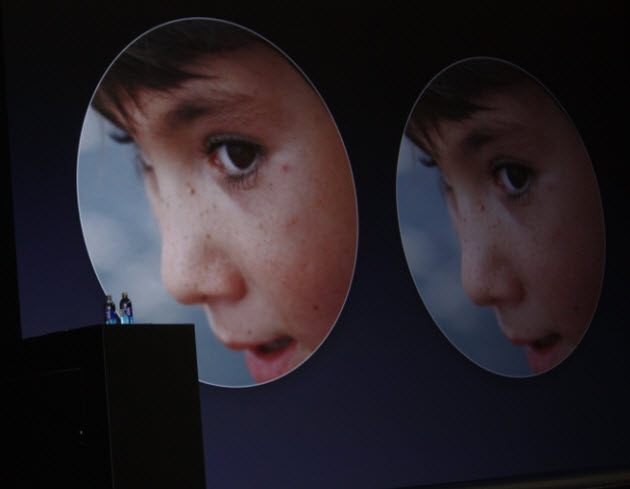 Steve Jobs showed a close-up image of the iPhone Retina Display and the kind of images it can handle. The image on the left has 326 pixels per inch, or four times the image on the right. 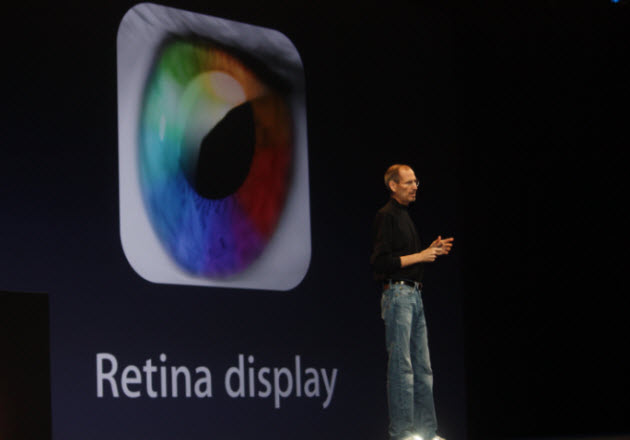 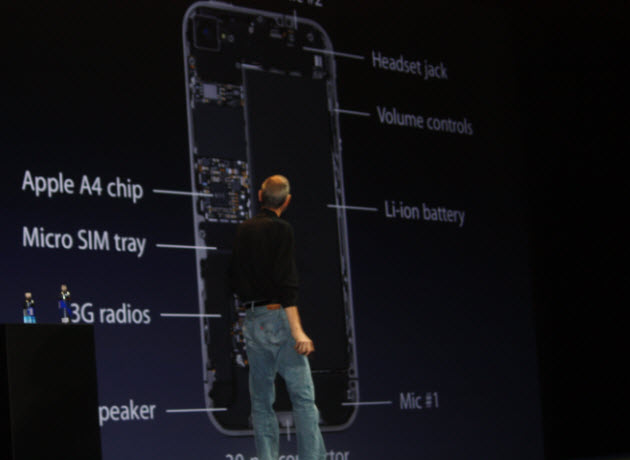 This diagram shows that the Apple A4 Arm-based microprocessor, which is the brain of the iPad, is also the CPU of the iPhone 4. 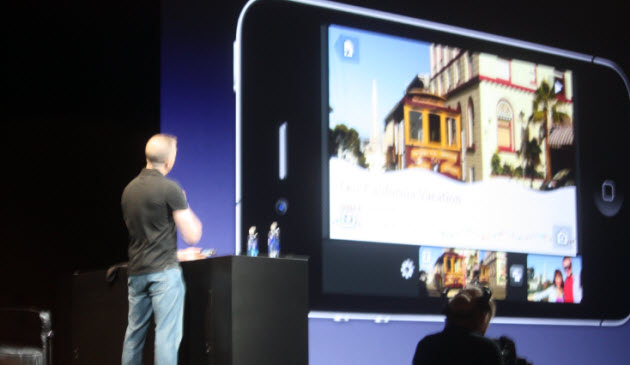 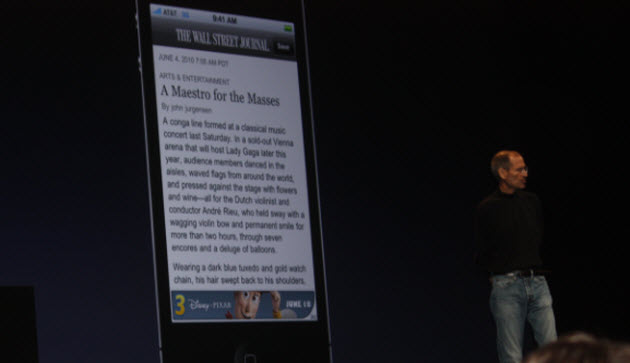 You can see how an iAd would look at the bottom of a Wall Street Journal story. 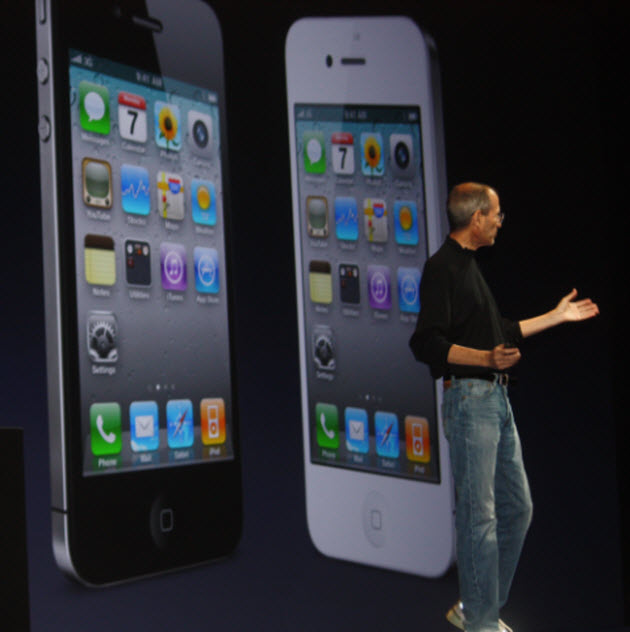 You can get the iPhone 4 in black or white for $199 for a 16 gigabyte version. On top of that, Apple is selling new colorful iPhone cases. 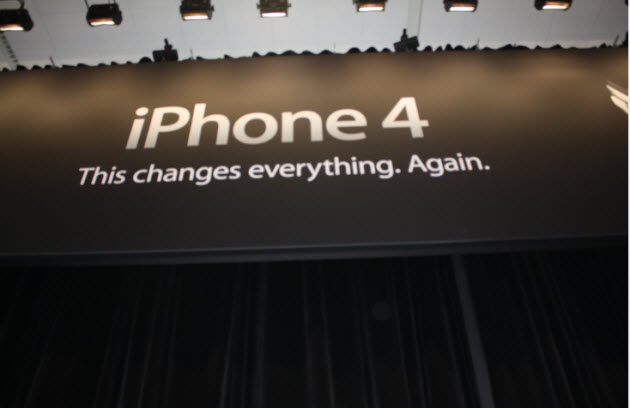 Apple is not one to be humble about its messaging. 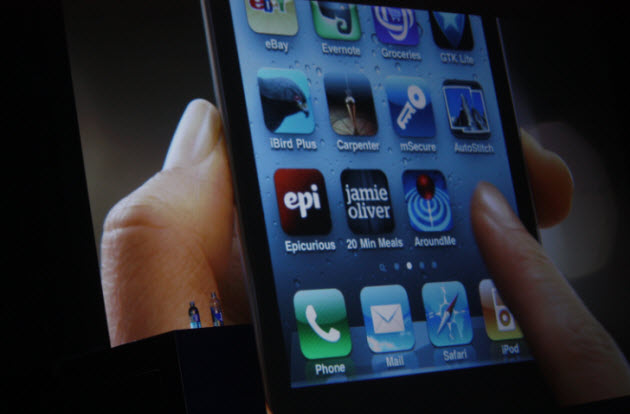 Now that is a crystal clear screen, projected on a big screen for all to see. 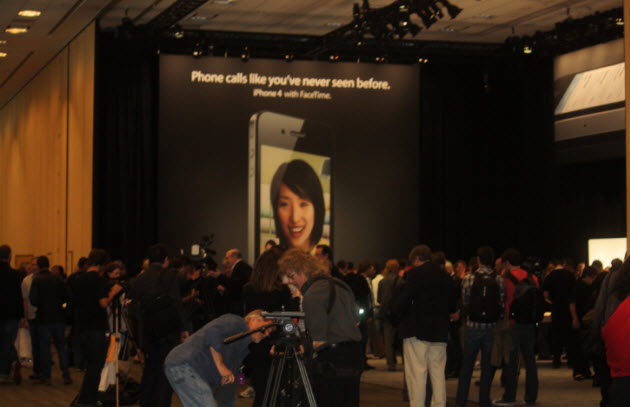 The press got a good look at the iPhone 4 after the keynote was over. 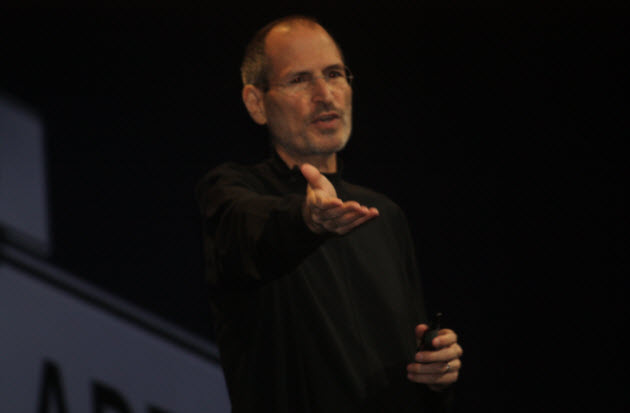 I could swear that Jobs was saying here, “Give me your money now.” 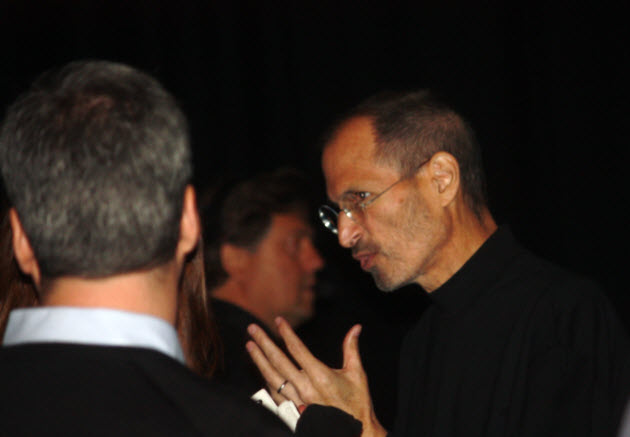 Afterward, Jobs did a little bit of socializing.