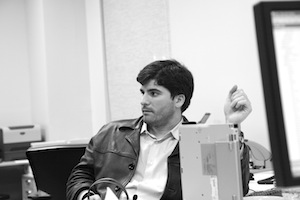 We are delighted to announce that Omar Hamoui, Google’s new vice president of mobile ads, will be sharing his views on the future of mobile advertising in a fireside chat at VentureBeat’s MobileBeat 2010 conference next month. The theme: “The Year of the Superphones.”

Few in the industry are more qualified to sketch out their vision of the industry. As the founder of Admob, Hamoui has walked the walk.

We at VentureBeat followed him as he led AdMob, amidst market uncertainty, to succeed with two big bets on how the industry will evolve: first, the emergence of platforms for open mobile, and second, the emergence of the iPhone and the app economy. After Google’s acquisition of AdMob, he will now be able to use his industry insight to lead Google’s mobile advertising efforts. At MobileBeat he will talk about his view on the next wave of mobile advertising innovation.

Here’s a recap on Hamoui’s career as a visionary in the mobile advertising industry. Read on for more on why Hamoui’s insights are a must-listen.

AdMob and the emergence of open mobile

Open mobile stands for an era when small startups really can build a business without having to know all the secret handshakes for the insiders’ telecom club. As AdMob investor Rich Wong explained in a 2008 VentureBeat guest post:

“The ‘closed mobile’ era was about mobile startups ‘getting the operator deal’. It was about being at an mobile industry conference like the CTIA, attending meeting after meeting to make sure the startup ‘got that Verizon deal’ or ‘got that Vodafone deal.’ These deals were transformative to startup companies.”

That was the situation when AdMob started. Operators were still the kingmakers. But that swiftly changed, as Wong observed a year later when Google’s Android operating system had joined the party:

“[O]perators have lost their status as the kingmakers – they no longer have dominant control of which technologies, services, and handsets consumers will see. Internet giants such as Google, Apple and to lesser extent Yahoo and Microsoft lessen the influence of operators. Most players in the mobile are now looking for ways to work around the mobile operators, or find marketing strategies going directly to the consumer, bypassing the operator.”

The second wave which AdMob took advantage of was the growth of Apple’s iPhone and the app economy. Their relentless rise, inevitable in hindsight, were not that clear in 2007. In fact, the first knee-jerk reaction was that the iPhone would be bad for mobile ad networks. As the iPhone was announced in January 2007, Hamoui himself addressed the debate:

“The iPhone does, however, beg the question: What does this mean for AdMob and mobile advertising in general? It can’t be good, right? The argument goes like this: The iPhone has a full featured Web browser. If people are experiencing the full-featured Web, they’ll be experiencing full-featured Web ads. Therefore specialized mobile ad networks will no longer be relevant… The iPhone and other devices like it are going to push us to scale our technology in new ways, as well as provide us with some powerful new ways to keep our ads relevant and user-friendly.”

In early 2007 this was a courageous minority opinion in the industry. On the other end of the opinion and investment spectrum there were mobile advertising networks like Amobee (backed by Vodafone, Telefonica, Sequoia and Accel). Companies like these were essentially bets that mobile advertising will blossom with a strong carrier involvement. Back then these investment bets looked as strong as the AdMob one for most industry pundits. However, MobileBeat 2008 attendees were more opinionated: they voted AdMob the winner of our first MobileBeat startup competition.

While AdMob’s traffic continued to grow over the first several months of 2008, it wasn’t until Apple’s launch of the App Store and the development of mobile-optimized websites that AdMob’s growth rapidly accelerated. In the beginning developers did not value mobile advertising. The money came in only when bigger advertisers became engaged. This emergence of app economy hit most of the industry unprepared — but not AdMob.

Back in November 2008, while the rest of the economy started to tank, Jason Spero, vice president of marketing for AdMob, told us: “The iPhone market is exploding, Inventory is growing and advertisers are hungry for it.” Two drivers pushed revenues up at some ad networks that were tuned into the changes — specifically AdMob and Quattro Wireless. First, publishers of new mobile applications started paying other publishers every time a user clicked on their ad to download their applications. Second, brand advertisers sought to reach iPhone users as they surfed more frequently on their applications. 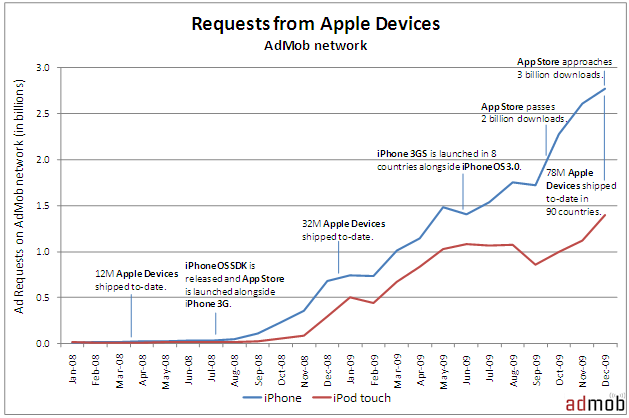 Soon afterwards, AdMob started to introduce a lot of products to take advantage of apps. Among others, it created the first in-app advertising on the iPhone, today a standard ad format. Slowly, the public started to notice the iPhone effect. In March 2009, AdMob threw one of the early iPhone developer meetups which sparked a debate why developers are more excited about the iPhone than other platforms in mobile.

As the year unfolded, a new mobile platform and i’s app store gained traction on AdMob’s network: Android. By March 2010, Android had surpassed the iPhone in the advertising market, accounting for a greater share of smartphone-served ads in the United States.

Google and Apple square off

The start of 2010 was dominated by Apple buying Quattro Wireless and Google buying AdMob. According to popular opinion, the two companies are now squaring off in the mobile advertising market. When the FTC approved the Google-AdMob deal it commented directly on the relationship: “As a result of Apple’s entry, AdMob’s success to date on the iPhone platform is unlikely to be an accurate predictor of AdMob’s competitive significance going forward, whether AdMob is owned by Google or not.”

A couple of weeks ago at Apple’s Worldwide Developer Conference, CEO Steve Jobs presented a slide that claimed that 48 percent of spending on mobile advertising in the United States from July through December of 2010 will go to Apple’s iAd advertising system for its iPhone and iPad portable gadgets. He further opined that mobile advertising is in dire need of improvement, and that Apple will be the company to do it.

At the same time, the company released new terms and conditions for developer which, if enforced as written, would prohibit app developers from using AdMob and Google’s advertising solutions on the iPhone. These advertising-related terms both target companies with competitive mobile technologies (such as Google), as well as any company whose primary business is not serving mobile ads.

In a response posted on AdMob’s company blog, Hamoui wrote:

“This change is not in the best interests of users or developers. In the history of technology and innovation, it’s clear that competition delivers the best outcome. Artificial barriers to competition hurt users and developers and, in the long run, stall technological progress.”

The big question now is, how will mobile advertising need to evolve in the next few years?

In the next few months app stores will open up to new form factors beyond phones. We will not only see apps for tablets, but for TVs and in-car entertainment devices. The industry is challenged: How will it make ad units more engaging, create better results for both advertisers and consumers?

Mobile advertising has been riding the iPhone wave. Now it is starting to ride the Android wave. When and how will things shift again? What is the role of HTML5 ? How important is cross-platform development ?

VentureBeat is proud to have one of mobile advertising’s visionaries to share his views of this exciting future at MobileBeat.

For all conference details, go here. To register, go here.

*We also want to thank the mobile industry leaders that are supporting MobileBeat 2010, including GetJar, Placecast, Greystripe, Qualcomm, and Microsoft as Gold Sponsors, AdMob, OpenMarket, Navteq, and MasterImage 3D as Silver Sponsors, and Nexage, Offerpal, Marvell, and Verizon as Event Sponsors.