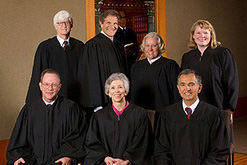 Two decisions published in PDF format today by the United States Supreme Court are carefully written to make clear that neither of the two will change the way business is done in America.

In the more strategic case, the Court declared that the Sarbanes-Oxley Act, passed in 2002, violates the U.S. Constitution in the rules it defines for how a member of the Public Company Accounting Oversight Board may be removed from office. The board, better known as PCAOB, has five members appointed by the U.S. Securities and Exchange Commission. Sarbanes-Oxley rules state that only the SEC may remove a board member, and then only if the commission determines “good cause.”

The Supreme Court agreed with the Free Enterprise Fund‘s petition that this setup is unconstitutional. Why? Because the rules block the President of the United States, head of the executive branch of government to which the PCAOB belongs, from removing a board member at will. However, the Court wrote, this does not render either the board itself or the SarbOx regulation unconstitutional. Only the rule on board member removal will need to change.

The decision is a disappointment to businesspeople who had hoped to see the entire Sarbanes-Oxley Act shot down. SarbOx, most entrepreneurs will tell you, is one of the reasons fewer companies aim for an IPO these days, because the demanding rules on accounting practices only apply to publicly-held companies. Better to stay privately held, many believe, and keep the business simple and safe from government regulation.

In the Court’s other business-related decision, the judges declared a patent application by Bernard Bilski and Rand Warsaw to be unpatentable. The proposed patent described a method of hedging weather-related risk in energy prices. The Court concluded that because the method in the application is expressed as a mathematical equation, it is an abstract idea, like the mathematical relationship between a circle’s radius and its diameter, rather than a process invented by Bilski and Warsaw. This prevents it from being patentable.

The Court made clear in its decision that it was rejecting Bilski and Warsaw’s specific application, and was not making any broader statement on the definition of what can or can’t be patented. So, if you were hoping that SarbOx would be thrown out completely and your company could obtain a patent on the value of pi, today was kind of a letdown.