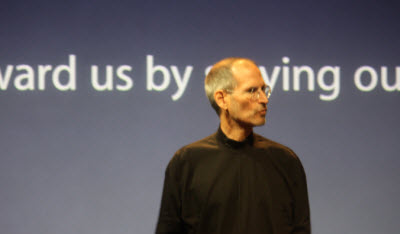 Apple chief executive Steve Jobs spent a lot of time answering questions about the iPhone 4’s reception problems today at an “antennagate” press conference at Apple headquarters in Cupertino, Calif. We shot the videos below on the scene.

In the first video, Jobs explains to a Consumer Reports writer why Apple will give free rubber bumpers to iPhone 4 customers who request it, but not to those who bought third-party cases. Consumer Reports says Apple’s move today is a step in the right direction, but there is no long-term solution yet. Hence, the iPhone 4 is still not on Consumer Reports’ list of recommended phones. Jobs spent a lot of time during the press conference answering questions.

In the second video, Jobs gives an impassioned talk about what Apple will do for its customers while a slide shows “we love our users” in the background.