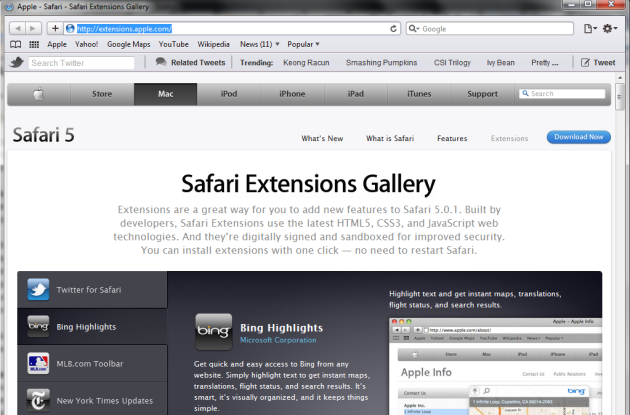 Apple released Safari version 5.0.1 today, and while the version number may seem minor, it’s actually a fairly important update since it finally brings extensions to the web browser.

Apple previously showed off its extensions last month, and Safari 5 users were able to get some early extensions from other sites, but this marks the first full release for extensions on the web browser. Today also marks the unveiling of Apple’s Extensions Gallery, which is basically a prettier version of the extension repositories created by Google and Mozilla.

Mozilla’s Firefox was the first web browser to embrace the notion of extensions — small add-ons that can greatly increase the functionality of a browser — and earlier this year Google’s Chrome browser also received extension functionality. Microsoft’s Internet Explorer has also had extensions for some time. At this point, it seems like any web browser that aims to be successful needs to have some sort of extension framework.

Among the Safari extensions available today are a Twitter client, a Delicious extension, and an Instapaper extension. More so than other browser extension frameworks, Safari’s extensions seem to integrate smoothly into Apple’s manicured user interface.

What’s most surprising about this release is that it’s taken Apple so long to get extensions into Safari. When Firefox was the only extension-equipped browser on the market, it was steadily building its user base over Internet Explorer, and dedicated users found it difficult to wean themselves off of the convenience of extensions — making it a chore for them to move to other browsers.

Chrome was well-liked for its speed and simplicity when it was first released, but it wasn’t until Google added extensions that it finally started making a dent in Firefox’s market share. As of this May, Chrome had 6.73 percent of the browser market — mainly consisting of the early-adopters that initially made Firefox so successful.

It remains to be seen how much the late addition of extensions will help Safari, but at the very least we can say it won’t hurt. It will give users another reason to keep using Safari instead of being tempted by another browser, and it also opens the door for Apple’s mobile Safari on the iPhone and iPad to eventually get extensions of their own.