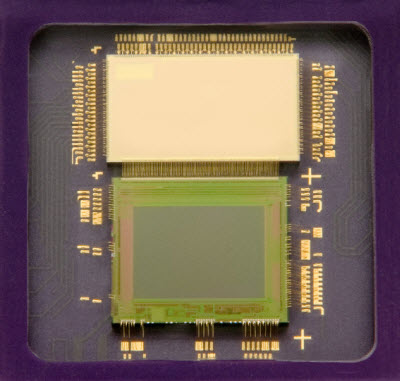 eillance cameras are proliferating like mad through our security-conscious world. China already has about 7 million video cameras watching streets, hotel lobbies, businesses and even monasteries. And in the US, there are apparently some 30 million surveillance cameras at work, collecting 4 billion hours of footage a week.

That’s why there’s big potential for the latest Seawolf camera chip from Pixim. The Seawolf chip takes previous-generation technology and packs it all together in a single piece of silicon.

Mountain View, Calif.-based Pixim is already a big player in making image processors for security cameras. Now it can combine the image processor with other electronics to make smaller and higher quality cameras that work in all lighting conditions.

The chip is all-digital, in contrast to earlier solutions that require multiple chips with both analog and digital functions. The result is 10 times the low-light performance of the previous generation, Pixim says. It has wide dynamic range, meaning it can capture images with both bright lights and shadows in the same scene. The hardware cost is half the previous generation. Pixim’s Digital Pixel System uses hundreds of thousands of pixels on a chip to capture images and constantly self adjust.

The Seawolf chip can be used in devices such as web-connected security cameras. It can capture full D1 video at 30 frames per second. The chips can be used in cameras at retail, banking, gambling, schools, transit, commercial and industrial sites. The Pixim chips compete with charge-coupled device (CCD) chips made by companies such as Panasonic and Sony. Pixim’s customers using the technology include Dallmeier, March Networks, Genie CCTV, Ovii, and UTC.

Pixim’s chips have been very popular in China as well as elsewhere in the world. In the U.S., government agencies have been installing security cameras for Homeland Defense reasons. Corporations are also installing cameras that do a better job of capturing faces of people going in and out of buildings. In the United Kingdom, the government has also installed widespread security cameras to deter crime.