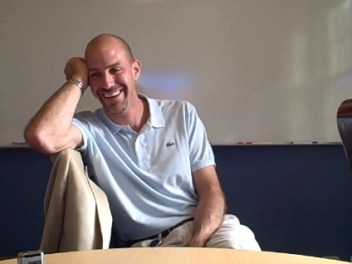 The internet calling service Skype is finally gearing up for an Initial Public Offering. In a registration statement with the SEC, the company (whose CEO, Josh Silverman, is pictured to the right) announced that it intends to raise a maximum of $100 million through the offering, and that it will list the stock on the Nasdaq. The filing leaves some details ambiguous, so the actual IPO amount may end up being much more, or less, than $100 million.

The news comes after eBay finalized the sale of 70 percent of the company in November 2009 to an investment consortium led by Silver Lake Partners. It included participation from Canada Pension Plan Investment Board, venture firm Andreessen Horowitz, and Joltid — the peer-to-peer technology company founded by Skype’s founders Niklas Zennström and Janus Friis. The sale left eBay with 30 percent of Skype, Joltid with 14 percent, and the rest of the investment group with the remaining 56 percent. The deal valued Skype at $2.75 billion, and eBay was paid $1.9 billion in cash, and received a note from buyer worth $125 million.

To make the deal happen, eBay first had to settle some longstanding lawsuits with Skype’s founders — drama that mostly centered around the Joltid-owned peer-to-peer technology underneath Skype. Joltid was transferred to Skype as part of the deal, and it was partially what led to the founders receiving 14 percent of the company.

In addition to the IPO announcement, Skype’s filing today revealed some interesting details about the company and its user base. For one thing, it’s profitable. Skype snagged $13 million on $406 million in revenues for the first six months of 2010. Looking at it with non-GAAP metrics, Skype generated $115.8 million in profits in that time, reports All Things Digital.

The company says it has 560 million registered users, with 124 million using it every month. 8.1 million of those users pay an average of $96 a year for the service.