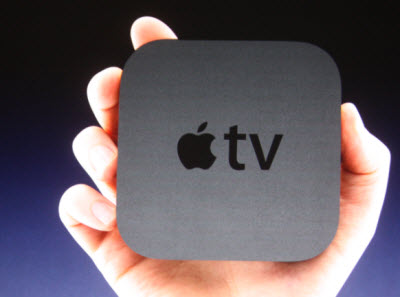 Steve Jobs showed off a new version of Apple TV today. The device plays movies on your TV and is a fourth the size of the original version, and it can stream movies from the Netflix movie service.

Apple introduced the first version of Apple TV in 2006, and it was one of the company’s few duds. Jobs said that Apple has learned that the No. 1 thing people want is Hollywood movies and TV shows anytime. They want it all in high-definition, low prices, and don’t want a computer on the TV. They don’t want to manage storage or sync content. They want it silent, small and cool. 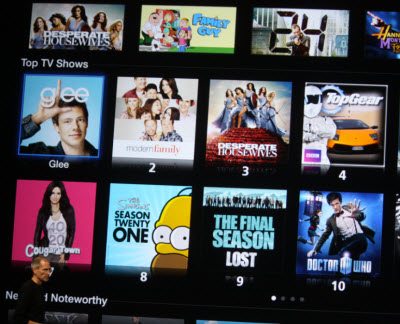 The new version has a power connector, is Wi-Fi enabled, has a simple aluminum remote control and connects via a high definition multimedia interface (HDMI). Now movies can be rented for less, just $4.99 each; there are no sales anymore. There is no storage management. You can stream data such as photos and music from your computers. You can show “stunning photo slide shows.” It operates silently and is cool. The first run movies will be available the same day they come out on DVD disks. To buy TV shows, it used to cost $2.99. That was considered too expensive. So now they will be 99 cents to rent.

So far, only ABC and Fox are participating in the low-priced rentals, Jobs said. He said he hopes the other TV show owners will come on board “once they see the light.” Movies and TV shows will start streaming within seconds of when you select them. The interface is pretty similar to the old once, with enhancements. You can see reviews of movies and TV shows. Jobs showed a demo of Iron Man 2, which started within seconds of a click.

The new version of Apple TV has a lot of the advances that Apple has made in user interfaces since the last launch. The photo viewer is more intuitive and has more options for viewing slide shows. With a feature called AirPlay, you can stream the Apple TV video from the living room to another Apple TV device in the house or an iPad. You can start watching in one room and move to another and watch at the same place in the movie where you left off. The same goes for an iPad. It is launching in six countries for $99, far cheaper than the original $299 price.

Chris Martin, the lead singer of Coldplay, closed the event by singing solo.