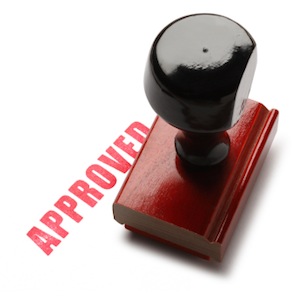 As debates continue to spring up about how smartphones and mobile applications use our data, there’s a growing opportunity for companies that say they can help protect our privacy — like Truste.

San Francisco-based Truste, once a non-profit and now a venture-backed for-profit company, already offers a “trustmark” certifying that websites meet its privacy standards. Chief executive Chris Babel said that doesn’t mean the sites don’t give away any information ever, but rather that they are transparent about what data they’re collecting and what they will do with it. In addition to examining a site’s privacy policy, Truste tests the execution of that policy by creating anonymous accounts with that site, and it investigates user complaints.

Now Truste offers a similar certification for mobile websites and applications. In many ways, the company will do the same work on smartphones that it already does on desktop browsers, Babel said. The difference is that mobile applications collect data about your location that most websites don’t have.

In order to receive the Truste seal, apps and sites must notify users the first time they’re using location data and then flag every subsequent use if it involves sharing that data with third parties. That’s not as strict as Apple’s policy on the iPhone, which Babel said “might be overkill,” but it brings a higher standard to Android, where apps ask to use your location only once. (Babel noted that Truste didn’t develop its policies in a vacuum but consulted groups like the Mobile Marketing Association and the Internet Advertising Bureau.) 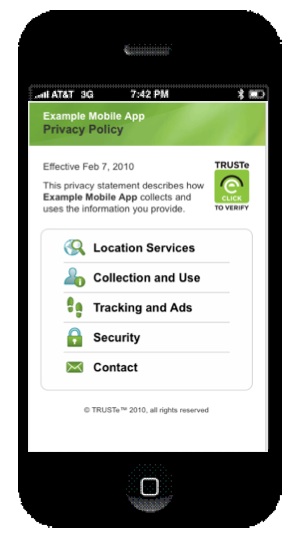 Beyond analyzing mobile privacy policies, Truste has also redesigned its seal so that it’s readable on a mobile screen. Plus it has revised the privacy page users see when they click on the seal, replacing a single, lengthy explanation with a menu that allows users to click on different topics to see more details.

Companies like Yahoo, Facebook, eBay, and Apple use the Truste seal because it encourages users to sign up and makes them more likely to share their data, Babel said — customers usually see a 5 – 20 percent increase in data collected. Companies like Yelp, GoDaddy, the Weather Channel, and Thumbspeak all signed up as early testers because they’re hoping that the Truste seal will bring a similar increase to mobile downloads and usage.

One drawback right now is that there’s no way to display a Truste seal prominently within an app store listing — the best apps can do is include the seal in one of their screenshots or mention it in the text. In other words, it’s a bit of a challenge for a mobile app to advertise the fact that it has earned the trustmark. Babel said he’s talking to companies like Apple, Google, and app store GetJar about changing that.

Websites pay Truste for the seal, but Babel said the seal only has value if consumers, well, trust it. So the money hasn’t stopped Truste from rejecting applicants who don’t meet its standards, or kicking them out if they fail to uphold those standards.

Pricing for Truste’s mobile certification starts at $3,000 per app per year.