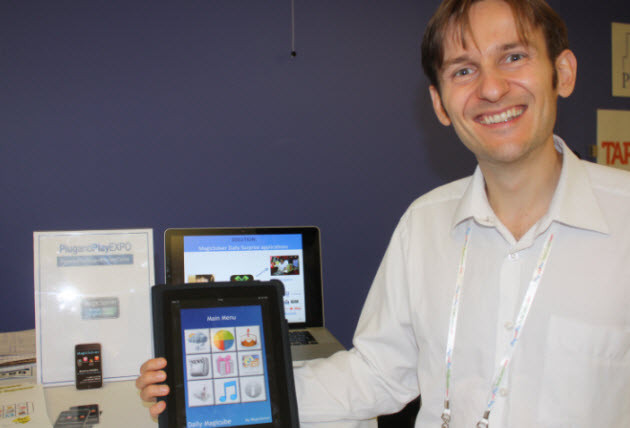 Magic Solver is attacking the app discovery problem head on. With more than 250,000 apps on the iPhone and iPad, it’s easy for developers’ apps to get lost and it’s hard for users to find  they really enjoy.

So Magic Solver has created the Daily Magic Cube app, which you can see in the picture and the video below in its iPad format. The company finds magical apps, or those that are delightful or surprisingly good in some way (it doesn’t refer to magic tricks). The Daily Magic Cube app presents you with just a single “magical” app each day that the company believes will knock your socks off. You can tap the screen to buy it if you want it. It also presents you with other highly filtered selections of news, videos or music. It thus reduces the complex, crowded App Store into a very simple app.

I caught up with the company today at the Plug and Play Expo in Sunnyvale, Calif. Emmanuel Carraud, chief executive of Magic Solver, was one of 40 executives that spoke about startups before a crowd of investors. His company is addressing the key issue of app discovery that we will address at our DiscoveryBeat 2010 conference on Oct. 18.

The point of the app is to save you time sorting through all of the content to find twhat you want, said Carraud, whose company is based in Cambridge, U.K. The presentation is cute as an animation reveals the app of the day to you. If you want more than just one app, you can browse through a bunch of categories such as Top Stories, Gossip, Sports, or Health. You can view the top-rated and most-watched video on YouTube. You can check out tweets, view pictures, listen to songs and find other cool stuff.

Magic Solver is getting ready to launch the app in the U.S., where the company hasn’t had much of a presence yet. It has set up an office at the Plug and Play Tech Center in order to pull off the launch.

The company was formed in 2008 by Carraud and two friends, Oliver Lamming and Leon Palm, from Cambridge University. They created a Sudoku Solver that worked by taking a photo of a Sudoku puzzle and then solving it for you. They went on to win a business competition at Cambridge and have since created a bunch of games and other apps — Daily Magic Cube is the 15th — that have been downloaded more than 2.5 million times.