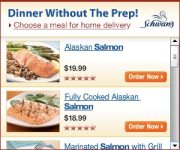 Looking to make their display ads more appealing to advertisers and agencies, Yahoo today announced on its blog that it has plans to buy Dapper, a mashup technology to bring the advantages of search-based advertising into the world of display ads.

Dapper’s technology lets users easily set up their display ad preferences online, such as total amount to spend on a campaign, and put the most updated and accurate website information into display ads. For example, an e-commerce website selling electronics would be able to showcase its most recent sales items in its display ads in real-time.

Competitor LucidMedia, a similar platform for optimizing display ads, was used by Yahoo Right Media in 2008 to ensure that advertisers’ creative display advertisements appear alongside relevant content on publishers’ sites.

When the company launched, results were promising but not well documented due to the early stages. Today, Dapper appears to showcase some impressive statistics, including results of 2 1/2 and 8 times higher engagement from consumers.

Dapper’s vice product of product marketing, Amit Kumar previously led Yahoo’s SearchMonkey platform before joining the startup in September and could have been a strong connection in the acquisition.