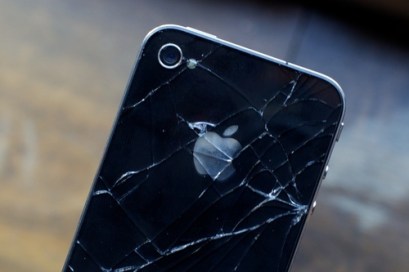 While Apple seems to be finally moving on from the iPhone 4’s antennagate controversy, the company may be gearing up to deal with a new problem centered around the device’s glass back, gadget site GDGT reports.

Sources tell GDGT that Apple engineers are in a “quiet lockdown” following the events of antennagate because they’ve discovered that non-Bumper cases — those that slide on and cover the rear of the iPhone 4 — could lead to scratching, and potentially full-on fracturing, of the device’s glass back. The cases apparently are prone to particulate matter getting stuck between them and the iPhone 4’s rear, which leads to damage.

As GDGT explains: “To put it another way: Apple is afraid you might buy a standard slide-on iPhone case, put it on your phone, and then discover the next time you take it off that the entire back of your device has been shattered by no fault of your own.”

To counteract this discovery, Apple has apparently removed third-party slide-on cases from its stores. The issue also might explain the unusual shape of Apple’s official Bumper cases, which only protect the sides of the device, and leave the glass back unobstructed.

The news could be fatal for third-party manufacturers who specialize in slide-on cases. Users will also continue to buy the cases outside of Apple’s stores, so if the issue is real, they will continue to be affected.

While the iPhone 4’s glass back is certainly a gorgeous design move, many have questioned its utility since the device was announced. The plastic rear feature on the iPhone 3G and 3G S, and the metal rear on the original iPhone, were all prone to scratches, but at least they wouldn’t shatter if you dropped the phone. As the Wall Street Journal reports, Apple may be looking at an entirely different design for the next iPhone to avoid these issues.