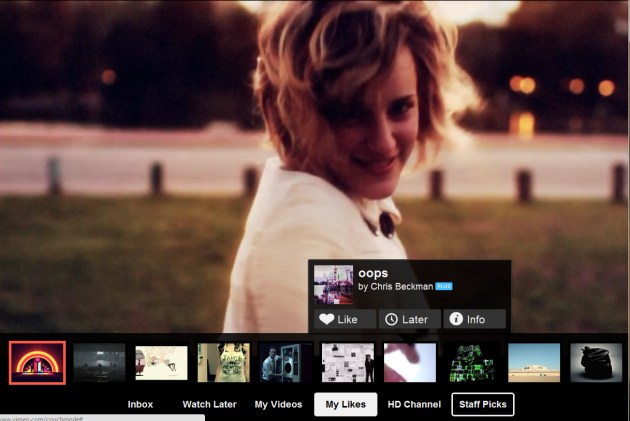 Streaming video site Vimeo has jumped on the Google TV bandwagon with its new Couch Mode — a way to easily view the site’s videos uninterrupted like a TV channel.

Much like Google’s own YouTube LeanBack, a couch-friendly way to view YouTube videos, Couch Mode is all about throwing you directly into a stream of high-quality content. A video starts playing as soon as you visit the site, and you can bring up a menu at the bottom of the screen to navigate between videos. It also lets you perform typical Vimeo site functions, such as “liking” a video, and adding it to a list to watch later.

The menu also gives you access to videos you’ve uploaded to the site, your “likes”, a high-definition channel, and Vimeo staff picks. Couch Mode is built using HTML5 and CSS3 technology, so it doesn’t rely on Adobe’s Flash at all. In addition to Google TV, you can use Couch Mode on any computer using the Google Chrome or Apple Safari web browsers.

More so than YouTube, Vimeo has attracted a user base that contributes high-quality original videos, many of which could be classified as short films.

Vimeo definitely won’t be the last site to optimize itself for Google TV. In my testing, other popular spots like the comedy site Funny or Die perform terribly on the Logitech Revue Google TV box — mostly because of their over-reliance on Adobe Flash for their video players, as well as surrounding ads.