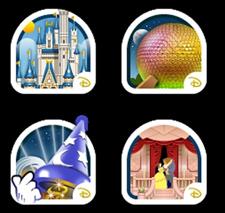 The agreement will provide Gowalla users with custom Disney Gowalla pages, a collection of recent check ins and activities for specific parks and resorts, as well as hundreds of available custom Passport stamps, an image in recognition for checking in to a specific attraction.

Disney and Gowalla have come up with several ways to promote the new partnership, according to the Disney Parks Blog. Special events will be held throughout the year as well as the launch of a series of trips, a special bundle of attractions by age and interest. The company gives the following example:

“For the Little Ones (under 44 inches)” is a dream track fit for pint-sized park-goers to Magic Kingdom in Florida. It includes “Mickey’s PhilharMagic,” Dumbo the Flying Elephant, Peter Pan’s Flight and more.

Disney is definitely a high-profile brand that makes sense for Gowalla as it looks to compete for users with rival Foursquare. Both Gowalla and Foursquare recently partnered with government agency NASA, which brought a ton of attention to the companies. Interestingly, Gowalla made the NASA partnership announcement first, but Foursquare quickly followed.

On a more personal note, I was recently in Disney World and used Foursquare to check in all over the place. You can’t imagine all the stuff you can do on your smartphone while waiting in line for an attraction. But I’d have to say that after a few check ins, I became bored. If the Gowalla and Disney had this partnership while I was there, I’d probably be a Gowalla user at this time. Another interesting angle to these partnerships – which ones can make users switch sides?