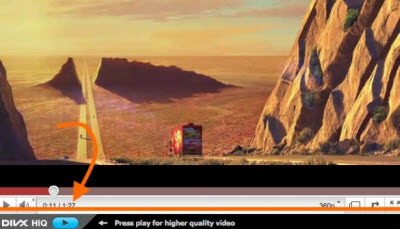 Web videos have come a long way, but they still aren’t perfect. Flash videos can drain your laptop battery and they can still run choppy.

DivX, the video technology company owned by Sonic Solutions, has an answer. The company is releasing a browser plug-in called DivX HiQ. You can get it by installing the DivX Plus Web Player and it will give you the option of viewing a video with a DivX player rather than Adobe’s Flash player or YouTube’s own player.

It shows that there is still a way to improve upon something that many people consider to be good enough. The new plug-in also shows that DivX still wants to become the king of the hill in Web video, and that there are clever ways to get users to adopt a new video technology, even though it’s hard to get a new video player installed at many different video websites. DivX players are already installed on more than 350 million hardware devices around the world.

DivX says it built its player to be smaller, faster, and less buggy. You can now get a good video experience even if you are watching on your old computer or netbook.

Once the player is installed, you can visit a web site such as YouTube and click on a video. On the lower left corner of the video, you have an option of viewing it with DivX. You can watch high-definition video streams (720p or 1080p resolutions) in full screen. You can also use it to view videos on any site, including Vimeo and The Onion.

Ryan Taylor at DivX said in an interview that DivX HiQ doesn’t tax a computer’s microprocessor, or main computing brain. While other video players may consume 80 percent to 90 percent of the microprocessor’s processing power, HiQ will use perhaps 20 percent to 40 percent.

You can also watch the video in window mode, which means the video can play in a window and you can surf the Web in the meantime. Power savings is about 30 percent in full-screen mode and 15 percent in embedded mode. A total of 13 web sites now support the HiQ option.