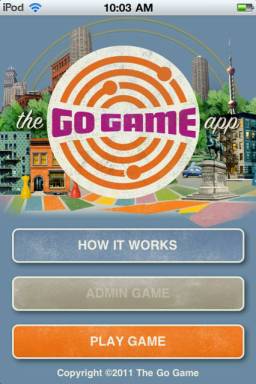 The Go Game, creators of location-based scavenger hunts for companies, today announced the launch of a do-it-yourself iPhone application for creating and participating in local scavenger hunts, according to a company announcement.

The application, which is now available in the Apple App Store, is being released at South by SouthWest (SXSW) with basic functionality, including the ability to challenge other players and participate in local scavenger hunts around Austin, Texas, where the event is held. The company plans on releasing full-functionality of the application soon to 10 major cities.

The target for the do-it-yourself application are individuals interested in creating their own scavenger hunts for events like parties, or small t0 medium-sized businesses. The Go Game noted that it was unable to service these smaller opportunities, but wanted to make its tool available to everyone. Full functionality will give users the ability to invite friends to join a scavenger hunt, select the city they’re located, choose a rating (ranges from G to R-rating), then hit the city and complete missions.

When asked about competition, The Go Game pointed out that Scvngr was similar in that it asked users to complete location-based activities. Though a few differences are evident among the two companies, including that Scvngr appears much more focused on working with brands to reach consumers, while The Go Game specifically targets companies interested in creating employee-based scavenger hunts. Another difference is the focus on video by The Go Game, which incorporates it by allowing users to vote at the end of each hunt then share it through Facebook and Twitter.

The San Francisco-based company, founded in 2001, has more than 20 employees and produced over 10,000 events in 500 locations for an impressive set of companies, including Google, Apple, Adobe and Electronic Arts.