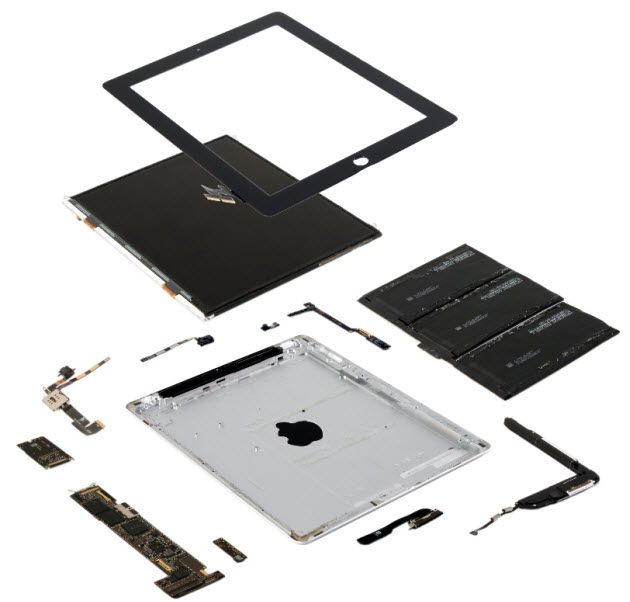 IHS iSuppli estimates that the new iPad 2 costs less than half of its purchase price, based on an analysis of the components inside the tablet.

IHS iSuppli frequently sets its team to work tearing down Apple products. A day after getting its hands on the device, the market research firm published its results through AllThingsDigital. The firm estimates that the iPad 2 with 32 gigabytes of flash memory costs Apple $323.35 for the Verizon Wireless version and $326.60 for the AT&T version. The device sells for $729.

The estimate shows that Apple has a lot of room to cut prices if necessary. Rivals are certain to launch a price war if their own tablet models take off slow. It appears that Apple is quite ready for that kind of battle, although Apple usually tends to emphasize profits over market share. The data is useful to investors who can now predict how much of a profit Apple will have on the iPad 2 models in the coming quarters.

IHS iSuppli calculates the cost estimate for bill of materials, which is the total cost that Apple pays for all the hardware inside the iPad 2. But it does not include costs related to developing software, packaging, shipping, distribution or manufacturing. In fact, Apple has higher distribution costs in one respect, since it runs its own stores.

By comparison, IHS iSuppli estimated that the Motorola Xoom cost $359.92. Motorola is selling the Xoom for $800.

The AT&T version is a little more expensive because it uses wireless chips that are more expensive or require an extra part. The Verizon version integrates global positioning system (GPS) navigation within the wireless baseband chip from Qualcomm. But AT&T had to add an extra GPS chip and a couple of other chips from Broadcom as well.

iSuppli says that Samsung is manufacturing the Apple-designed A5 processor chip for a cost of $14. The biggest component is the touchscreen display, which was built by LG Display and costs $127. Samsung supplied Apple with the NAND flash memory used in the iSuppli, though Toshiba supplied the flash for a device that was disassembled by iFixit. The flash, DRAM, and a Micron-made MCP memory chip cost $65.70.