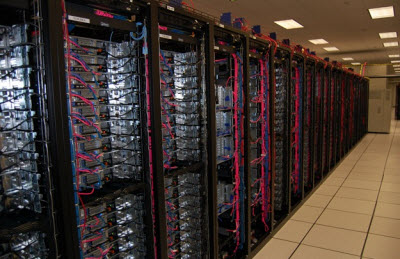 Computer maker Dell said today it will invest more than $1 billion in new data centers that offer cloud services and other technology for its customers.

The move seems like an effort to counter the growing services and software focuses of rivals such as IBM and HP.

Dell hopes to transform its business from simply selling hardware to providing more value-added services that will help customers offer consumers all sorts of web services in an era of an ever-expanding internet. The move combines hardware, software and service offerings to customers that will make Dell into a more well-rounded enterprise vendor.

HP voiced a similar vision — which included running data centers for its customers — as new chief executive Leo Apotheker laid out his strategy a couple of weeks ago. Both HP and Dell sell a lot of equipment to web service vendors such as Amazon, but now they’re effectively going to compete with Amazon in hosting businesses in their data centers.

The $1 billion figure is impressive, but given that the company already spends $50 billion a year to support revenues of $61 billion, it’s unclear how much that $1 billion is over and above what it would have spent anyway.

Over 15 months, Dell has made nine acquisitions related to everything from new services platforms to storage. All of them are helping to build up Dell’s capability to serve customers at “every layer of the architecture,” said Steve Schuckenbrock, president of Dell Services, in a conference call with reporters.

“This is a very important investment for us,” he said. “As we increase the velocity of bringing new solutions to market and drive the intimacy with our customers, we can change the nature of what we sell to our customers.”

In other words, Dell isn’t just selling hardware or software slapped together from vendors such as Intel and Microsoft. Rather, it is providing customers with data center capacity, cloud services such as mass storage, and other solutions. Schuckenbrock said this change is happening now because trends like cloud computing — where user data and apps are hosted in web-connected data centers rather than in on-site computers — are transforming the way that business is being done.

Dell’s $1 billion investment will include hiring more salespeople and training them to sell data center services. The company will also build 10 new data centers around the world in the next 24 months to host public and private cloud capabilities. Dell will also set up 12 “solutions centers” that include a lot of real-world labs where customers can figure out what they want to build and integrate different technologies together. That will help small and medium-size business adapt to the “virtual era” of the cloud more easily. Many of those customers don’t even know where to start.

Dell’s announcement comes a couple of days after it announced plans to open the Dell Silicon Valley Research and Development Center to establish a bigger research presence in one of the most important tech regions of the world. Dell has acquired four companies in recent years and will now centralize them in 240,000 square feet of office space in Santa Clara, Calif. Over five years, Dell expects its Silicon Valley workforce to grow to more than 1,500 people, from about 700 by the end of 2011.

Dell says one of the new services it will offer is “computer as a service,” such as hosting the entire backend service for a social network. Like Amazon’s S3 storage in the cloud service, Dell will also offer “storage as a service.”

Dell is based in Round Rock, Texas.