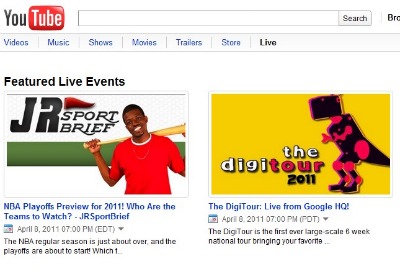 After a rocky start, YouTube today officially launched its live streaming service, along with the support of popular shows from the web video network Revision3, including The Totally Rad Show, Dan 3.0, and Destructoid.

The move towards live streaming is a big step for YouTube and will put it in competition with more established streaming services like Ustream and Justin.tv. It also gels well with the news that YouTube is planning to offer dedicated channels and original content.

YouTube Live, which is available at youtube.com/live, is the result of months of testing for Google. The company initially began testing live streaming early last September, but the result was mostly a mess with buggy streams and a limited amount of viewers. Google came back with an improved version of YouTube Live in January, at which point Revision3 climbed aboard as a content partner with the DiggNation show.

YouTube has already live streamed events like sports games and concerts, but the YouTube Live service is an effort to unify its streaming service. You’ll be able to see upcoming live events at the YouTube Live landing page as well as subscribe to streams from content partners. The company will also start rolling out its live streaming platform so that other content makers can join in on the live streaming fun.

Revision3 says it will be adding even more shows to YouTube Live over the next few days.