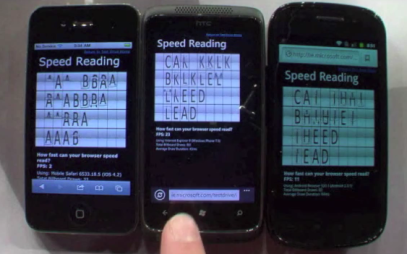 Microsoft wasn’t at all shy today about proclaiming the awesomeness of Internet Explorer 9 for Windows Phone 7, which will be part of a major fall update for the mobile platform.

Director of the Windows Phone program, Joe Belfiore, the closest thing the platform has to a public champion, showed off just how fast IE9 is compared to the iPhone 4’s browser and Android’s browser on the Nexus S. Not surprisingly, IE9 bested its competition (see video below) — mostly due to its support for HTML5 and hardware acceleration.

Even though IE9 was benchmarked on one of Microsoft’s own browser tests, the win is still a swift kick in the pants to Apple and Google, because it shows that Microsoft has finally surpassed them in one aspect of mobile innovation.

Belfiore says that IE9 on Windows Phone 7 runs the same powerful new engine found in the desktop version of the browser, which I found to be fast in my testing, though not as fast as desktop versions of Firefox or Chrome. IE9’s browsing engine has more of a chance to shine on mobile devices since both Apple and Google have been slow to implement extensive HTML5 support and hardware acceleration on their mobile browsers.

As you can see in the video below, Internet Explorer 9 ran Microsoft’s HTML5 benchmark at around 20 frames per second, while the Android phone chugged along at 11 FPS, and the iPhone didn’t even finish the bench in time, with 2FPS performance (even with a head start). Again, the test was definitely cherry-picked by Microsoft to show off its Windows Phone 7 improvements, but it’s still a clear sign that Apple and Google will have to step up their mobile browser game.