(Editor’s note: Healy Jones is a former venture capitalist and the VP of marketing for OfficeDrop. He submitted this story to VentureBeat.)

If you’ve spent the last few years improving your software as a service (SaaS) app and haven’t raised prices then you are probably undercharging your customers. Your solution is getting better and better, your customers are getting greater and greater value – why can’t you capture some of this value in the form of higher prices? 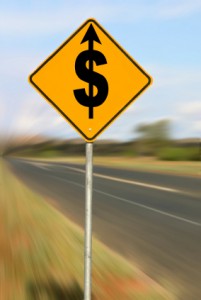 In fact, you probably started your company with prices that were too low – either because you were afraid to charge more for your service or because you didn’t realize just how much customers were willing to pay for your product. While raising prices can be risky, if done right it won’t cause a widespread customer freakout.

Raising prices doesn’t always have to result in a negative media blitz or a mass customer exodus. Having gone through (what we consider) a successful pricing change ourselves, here are a few tips to getting the fair market value for your app or SaaS product without sending your loyal fans running for the hills.

Do recon on similar services. – This may sound obvious, but how will you know the value of your product or service until you see what’s already out there? More importantly, if you have been adding features and functionality to your app, the original competitive set against which you compared yourself when you launched may no longer be as relevant.

Also, don’t just do an apples-to-apples (or app-to-app!) comparison. A major problem OfficeDrop made when comparing our price to other services was that we limited ourselves to other SaaS applications – when we should have realized that most of our potential customers were purchasing expensive, off-the- shelf software from traditional vendors at very high, one-time prices – then repurchasing expensive new versions of this software every few years.

So, check out the other similar services that follow a different pricing structure. Do the math. Are you leaving money on the table?

Be very deliberate with your communications. – Over-communicate. Communication to existing customers is absolutely critical to making a successful pricing change. In fact, when Sixteen Ventures, a SaaS Value Pricing consultancy, analyzed the problems Zendesk and Chargify had with their pricing changes, it was clearly much more about communication than the actual price increase.

In addition, our CEO, Prasad Thammineni, sent an email directly to our paying customers and to the potential paying customers who were currently in our free trial period. We kept the email brief and hyped our new features. Most importantly, we made it clear the users did not have to change the price they pay.

Prasad not only requested that users with questions email him directly (by simply replying to the email) he also provided his direct office phone number and our customer service number. Not a single user called, and he got two emails. One was email was, “Why are you bothering to tell me this?” and another simply said, “Ok.” Potential crisis, averted.

“Grandfather” current users in at their prior rate if you raise prices. – Let your paying customers keep their existing pricing. Give them the option to upgrade to the new prices, but keep your current paying customers happy. Critics of this move would say – “Man, if your service is getting better, then your old customers should be happy to pay the higher price. So don’t bother grandfathering ‘legacy’ users in at a lower price point.” I disagree.

We chose grandfathering since it seemed like the most civil way to raise prices for our loyal customers. They took a chance and started using a startup company’s software to run an important part of their business. Now they were reaping the reward by getting a substantially improved service at a lower price than the rest of the world.

The most important point in Prasad’s email to users was to let current customers know we were grandfathering them into their existing, current pricing plans. Additionally, we let users who were currently in our free trial period choose between the old pricing plans or the new pricing plans (different features for each, of course) when they upgraded to a paid plan. No bait and switch.

Finally, we didn’t promise that we’d eternally keep the old plans around, but made it very clear that we had no intention of changing their plans anytime soon. After all, inflation does happen.

Above all, don’t apologize. – Charge more because the service is getting better. Customers are getting more. Appearing defensive will automatically put customers on the offensive. Tie the pricing change to an increase in value – that is by bundling around new features/benefits that your customers and market will perceive as higher value.

People are much more likely to accept new pricing if it is bundled with a clear message that the change is because of new, valuable features.