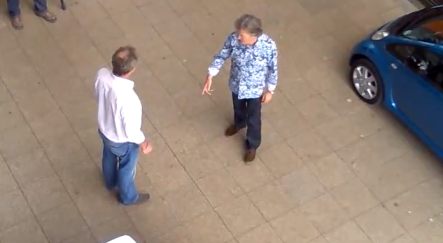 Top Gear, the high-profile car-fanatic show in the United Kingdom known for its high-profile libel lawsuit against Tesla Motors, might have been shooting an episode with another planned electric car outage, according to photos and video taken by a local newspaper.

In the latest video, the Top Gear hosts (shown right with a Mitsubishi i electric car) are seen pushing the dry electric cars to a nearby university to find a suitable place to charge them, according to photos taken by local paper The Lincolnite. The last time the team was seen pushing an electric car was when the team claimed the Tesla Roadster had run out of electricity — which led to a high-profile lawsuit from the sporty electric car’s manufacturer Tesla Motors. The latest filming shows the team pushing around a Nissan Leaf and a Mitsubishi i.

Top Gear producer Andy Wilman said the team behind the show, a show that touts the latest and greatest cars, calculated that the Roadster would only be able to travel 55 miles while being driven aggressively around the Top Gear track. The team never explicitly said it would not go past 55 miles on the show or that it had run out of charge, he said. The calculations took into account that the team was supposed to push the Roadster to its limits.

Tesla Motors quickly filed suit against the show, claiming it had falsely stated the car had problems and that the statements were libelous — claims that Wilman has vehemently denied. The company said Top Gear host Jeremy Clarkson falsely claimed the car ran out of charge after 55 miles and that the brakes were not functional. A fuse to a vacuum pump on the brake failed, meaning drivers would have to push the brake pedal down much harder to get the car to slow down, Wilman said.

While the limited range of an electric car is a concern for many drivers, shows like Top Gear regularly use it to poke fun at the nascent car market — which could actually slow adoption of electric cars. The Nissan Leaf, one of the cheapest electric cars at $33,000, can travel around 100 miles before needing a charge. Tesla Motors’ super-powered batteries last much longer, but the cars are significantly more expensive — the Roadster, for example, can travel around 200 miles but costs $109,000. That company’s next car, a sedan, will be less expensive and can travel up to 300 miles, but it will still be significantly more expensive than the Nissan Leaf.

You can find a video of the Top Gear team yanking a charging cable out of the window of a nearby university here. The team is seen speaking to the camera several times throughout the video while the crew buzzes about trying to find the best angle to film the escapade. There aren’t any official reports that it’s another “out of charge” stunt similar to the one the team executed for its episode with the Tesla Roadster — but it looks strikingly familiar.