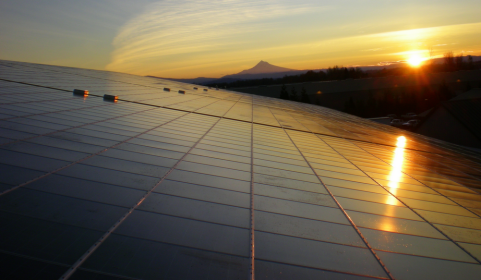 The price of polysilicon, a key component in manufacturing solar panels that capture sunlight and convert it to electricity, fell 5.1 percent to $74.4 per kilogram from $78.19 last month. Still, the decline is smaller than expected and the current prices could hurt profit margins for solar panel manufacturers that rely on crystalline silicon panels.

Many solar panel manufacturers live and die by the cost of polysilicon. Polysilicon prices crashed — along with almost everything else — when the United States and the rest of the world experienced one of the worst recessions since the Great Depression in late 2008. The falling prices were a boon for manufacturers like First Solar, whose profit margins rose because manufacturing costs fell. Polysilicon prices were as high as $500 per kilogram in early 2008 but have fallen to around $70 per kilogram in recent months.

First Solar uses a different manufacturing process to create its thin-film solar panels, which are usually cheaper than other solar panels and are made with Cadmium Telluride rather than crystalline silicon. That means that First Solar’s performance also relies on polysilicon prices — when prices are high, distributors and countries interested in solar panels might be more likely to turn to a company like First Solar to sate their renewable energy demands.

The price of monocrystalline cell prices fell to $1.14 per watt and multicrystalline cells fell to $1.09 per watt. Crystalline silicon cells still haven’t hit $1 per watt — a target First Solar first reached with its thin-film solar panels that showed solar power could scale to ravenous demand from Europe, China and the United States. Crystalline silicon-based solar panel cells are still more efficient at generating electricity and can capture up to 24 percent of the sunlight shining on the panel, compared to around 11.7 percent of the sunlight shining on a thin-film solar panel manufactured by First Solar.

[Update: Representatives from First Solar reached out to us to clarify that the efficiency rating of their Cadmium-Telluride solar panels is actually 11.7 percent, rather than 11 percent.]