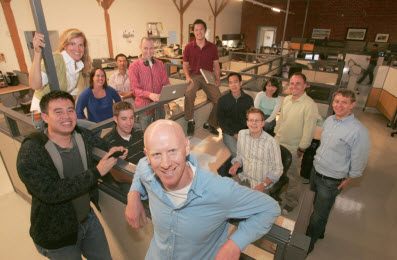 OpenX, an online advertising company whose customers include deals service Groupon and news site Business Insider, just announced that it has raised $20 million in a fourth round of funding.

The Los Angeles-based company bills itself as an open source alternative to ad serving products like Google-owned DoubleClick. In February, it launched its latest product, OpenX Enterprise, which includes both an ad server and an ad exchange. At the time, chief revenue officer Jason Fairchild described OpenX Enterprise as the company’s first product to really beat the competition on technology, not just price, for example by giving advertisers a more holistic view of their ad inventory.

OpenX says that revenue has grown nearly 600 percent in the past year, and it notes that it’s growing internationally thanks to partnerships with Dentsu-cci in Japan and Orange-France Telecom in Europe.

The company has now raised more than $50 million. The new round was led by SAP Ventures. Other new investors include AOL Ventures, Mitsui & Co. Global Investment, and the Sumitomo Corporation’s investment vehicle Presidio Ventures. Past investors Accel Partners and Index Ventures also participated.