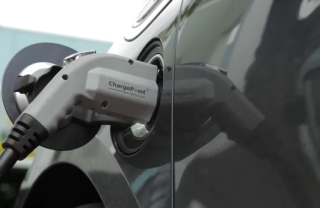 Google is converting 5 percent of the parking spaces to electric car charging stations in an attempt to encourage its employees to use its Gfleet electric car sharing program or purchase their own electric cars.

Google is installing 150 110-volt “Level 1” and 71 fast-charging “Level 2” 240-volt options — which can charge an electric car like the Nissan Leaf to an 80-percent charge in around 3 hours. The charging stations are more beneficial for people who live further from the Mountain View, Calif. Googleplex and its associated campuses and might encourage more Google employees to drive electric cars. So drivers can simply drop off their cars while they head off to work and return to have a near-full or full charge to make it back home.

Google already has an electric car sharing program called Gfleet. The company has 30 electric cars and plug-in electric hybrids, most of which are hybrid Chevy Volts or pure plug-in electric Nissan Leafs. The Gfleet program started in 2007 when the company retrofitted a fleet of Toyota Priuses with batteries from A123 to give Google employees a “green” option for car sharing instead of typical car sharing programs like Zipcar, which predominantly use cars powered by internal combustion engines.

Google is notorious for offering its employees a whole host of perks for working at the search giant. They get free transportation between the Googleplex and other areas in the San Francisco Bay Area. The company also gives its employees free food at the cafeteria. And there are reports of times when company officials are basically handing out wads of cash to their employees.

Most electric cars are limited in their range. The Nissan Leaf, one of the cheapest electric cars at $33,000, can travel around 100 miles before needing a charge. Tesla Motors’ super-powered batteries last much longer, but the cars are significantly more expensive — the Roadster, for example, can travel around 200 miles but costs $109,000. That company’s next car, a sedan, will be less expensive and can travel up to 300 miles, but it will still be significantly more expensive than the Nissan Leaf.

Google has invested $400 million in clean technology plays, including wind power and solar power plants. The company recently invested $55 million in a wind farm in southern California that will generate 1,550 megawatts of power. Google’s clean energy investments don’t come out of the company’s traditional investment arm, Google Ventures. Instead, the money comes from the company’s main treasury and is invested by the company’s Green Business Operations team.