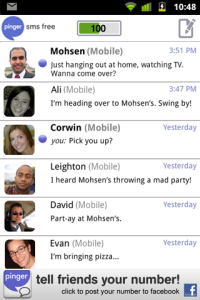 This article is part of a series of posts about DEMO alumni and news of their progress. Pinger launched at DEMO in Fall 2006. Check out more at DEMO.

Europe telecommunications is, in one word, super-pricey-holy-crap-don’t-text-me. Today, however, free text and talk service Pinger crosses the Atlantic from the U.S. to change that, starting in Germany.

The market for a free text and talk product is wide open in Europe. In order to dominate in the space, Pinger is taking the simple route, by including the carriers. By contrast, services like Skype disintermediate carriers, but at the cost of performance.

Joe Sipher and Greg Woock, co-founders of Pinger, believe — like many of us — that smart phones will soon be the rule, and that access to networks will be enticing for Skype users and those like them. In fact, venture capitalists Jim Goetz of Sequoia Capital and Matt Murphy of Kleiner Perkins said at yesterday’s MobileBeat fireside that 70 percent of phones sold this year will be smart phones. But working with carriers requires built-in knowledge of local markets and demands corporate resources to make end-consumer experiences better.

Texting in Europe works much differently than it does in the U.S. In the States, the Telecom Act of 1996 drove SMS prices down dramatically, leaving room for companies like Pinger to monetize on an advertising model. However, European carriers charge up to 800 times more than the US and work on a symmetrical scale. For instance, if I am telco A and my customer texts telco B, I need to pay telco B a fee. Fees even out, though, because text messages are general sent in two’s (a text and a reply). 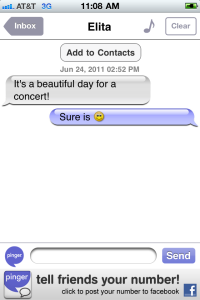 Leveraging this symmetry is the basis for Pinger’s successful European move. The goal is for Pinger customers to text and reply regularly, thus evening out the fees. How do you do that? Gamification.

Pinger did not construct the game alone. “Our sister company, Zynga, helped us develop the game,” said Pinger co-founder Joe Sipher. “One of the values in being a Kleiner Perkins company.”

In my opinion, the game is a smooth way of rowing around extreme telco charges and Europe agrees, according to Sipher. “One of the top five operators in the world says that we actually have an impressive model and is impressed with our profitability. They are wowed,” Sipher said. Pinger could not name the operator.

The app is free and will be available in Germany later this summer. Only free SMS is available, Pinger hopes to bring free talk to Germany soon after the text release.

Got six minutes to launch your game changer? We’re finding top-shelf thinkers from around the world ready to showcase their products at DEMO Fall, on the same stage where companies like Netscape, TiVo, E-Trade, and Java got their start. After you sweat out your six minutes of fame, head off the the DEMO pavilion to chat with potential investors, partners and show off the goods.  Apply for your spot here. Demo Fall 2011 is located at the Hyatt Regency in Silicon Valley, September 12-14.