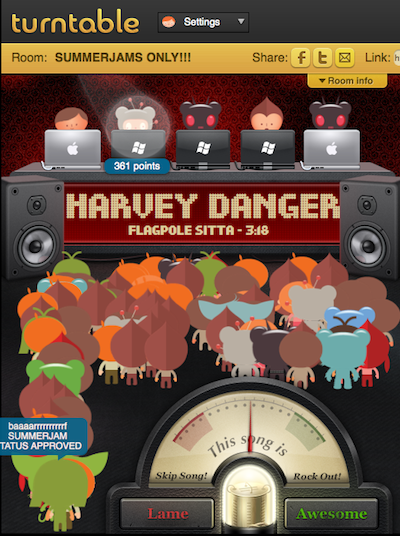 Music licensing company BMI on Thursday announced it had reached an agreement with social music service Turntable.fm, which will make it possible for Turntable to get access to BMI’s more than 6.5 million creative works.

“We are pleased to have reached an agreement that guarantees the more than 475,000 songwriters, composers and copyright owners BMI represents receive fair compensation for their creative efforts,” said Richard Conlon, BMI Senior Vice President, in a statement. “This agreement is yet another step in our long tradition of breaking new ground in licensing music for digital distribution.”

Turntable.fm is on a hot streak since its launch in late May and already has more than 300,000 registered users. We last heard the company was seeking $5 to $10 million in new funding, with a $40 million valuation. One Business Insider report suggested $7.5 million had been raised, while TechCrunch said the report was false.

The agreement with BMI, and potentially other music licencing companies like ASCAP, will help Turntable.fm in the legal realm. Questions about whether Turntable violated DMCA have persisted since its launch and agreements like this will help make sure it doesn’t get sued and shut down.

What to do you think of Turntable.fm? Are you a fan?