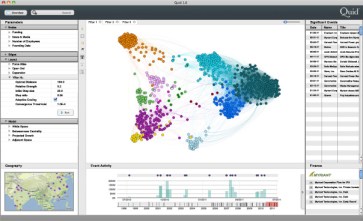 Quid, a provider of analytics for specific job sectors, announced today that it has raised $10 million in its third round of funding and has added PayPal co-founder and Slide founder Max Levchin to its board of advisors.

“At PayPal, they were able to combine algorithms, visualization and people together to really understand core networks,” Quid co-founder Sean Gourley told VentureBeat. “For us to get that insight of how you use computers, algorithms and data and combine that with human insight to understand real complexity, that’s huge.”

Quid basically maps out a specific sector, such as biofuels or microbiological systems manufacturing, and collects an enormous amount of data for the “state” of that sector. That can include the amount of government funding handed out or the number of jobs that are available in the sector. The company then creates a visual representation of all that data on a map.

Customers can then page backwards in time in the app and find the same data for various time periods, such as how many jobs there were in a sector a month ago and a year ago. The app can also model what it expects to happen in future time periods based off the information it gathers from previous “time slices,” Gourley said.

“Once you have a technology ontology, that can serve as a handle to explore that data, and it’s all time-sliced,” he said. “You can type in a space, explore that space, visualize it, look backwards and see where it is yesterday and model what you’ll see in a day or month ahead.”

Levchin is the former chief technology officer of online transaction manager PayPal, which was sold to online auction site eBay. He founded media-sharing site Slide in 2004, which was bought by search giant Google last year for $182 million.

The company previously raised $4 million across two rounds of funding that included  the Founders Fund and angels Gordon Crovitz, Allen Morgan, James Hong and Niko Dounchis. Levchin was also an angel in those rounds. The company is based in San Francisco, Calif., and has 40 employees.