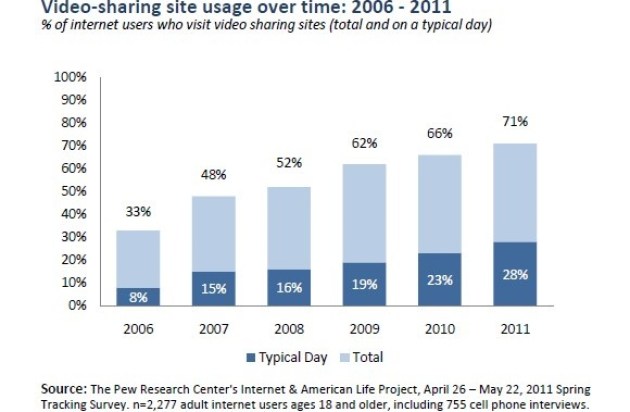 More online American adults are using video-sharing sites than ever before, according to a new study from Pew Research Center.

In May 2011, 71 percent of online adults reported watching videos from a site like YouTube or Vimeo. On top of that, 28 percent of adults polled said they visited such a site on a typical day.

“Video is a much more integral part of the Internet experience than ever before,” Lee Rainie, director of Pew’s Internet & American Life Project, told VentureBeat. “It’s much easier to share video across all kinds of platforms too.”

Rainie said he thinks the rise of social media and powerful mobile technology have greatly increased the likelihood of being exposed to online video. “Not only are users being exposed to video on their social networks, but it’s also a lot of people sending video links via e-mail with a short message,” Rainie said.

The most surprising statistic in the report to Rainie was that rural internet consumers are now just as likely to use video-sharing sites as those from suburban and urban areas. 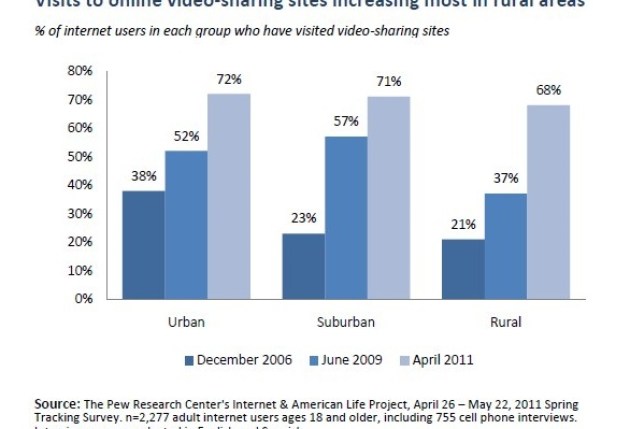 “Just a few years ago, it appeared rural users weren’t as open to online experiences but now they have caught up,” Rainie said.

One factor in this might be that there so many channels that the barriers to entry to uploading video have vanished. This has created a more diverse representation across all video channels. “Now that businesses, schools, non-profits and individuals can all post easily to these sites, that makes the offering more compelling,” Rainie said.

Another interesting statistic that came from the report is that African-American and Hispanic consumers are more likely to use video-sharing sites than white users. 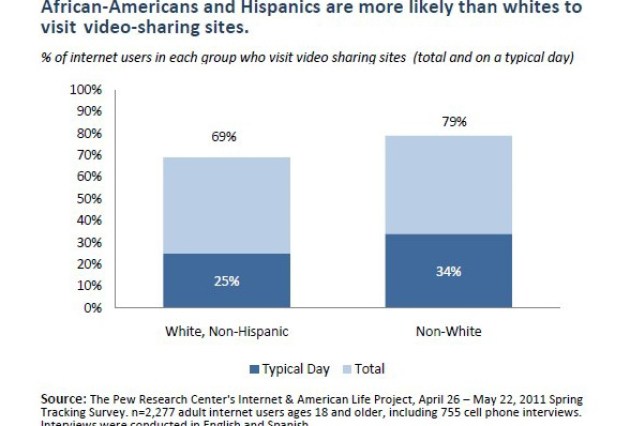 The trend of increasing online video use isn’t likely to slow soon, and more users will seek out video as it becomes further integrated into the social fabric of the web. Add in the number of mobile devices – including smartphones and tablets – that support instant online video streaming and you’ve got yourself a recipe for ubiquitous video use.

Do you think our country is addicted to online video? Or are we simply embracing the format as a convenient way to get information and entertainment?