The Internet is an international place. You can be in India on one page and Brazil the next. However, translation can be costly for small content publishers. Translation software-as-a-service (SaaS) company, Smartling, wants to change that. 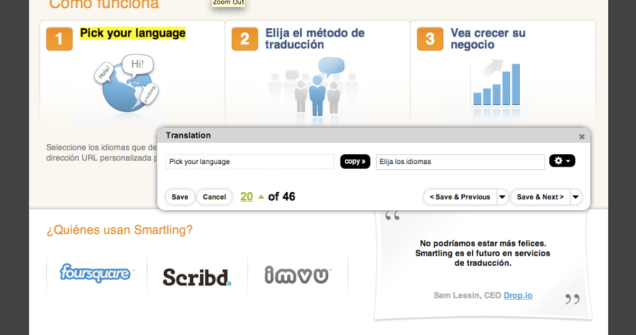 The service works like this: For each desired language, clients create separate DNS, or domain name system sites, which assign new IP addresses. Then, websites, mobile apps and more are dropped into Smartling’s dashboard, which is an end-to-end web application. This enables translated content to populate the website directly. Think of it as a WordPress back-end for translators.

Smartling offers two types of translation: one for the enterprise and one for small and mid-sized companies. According to Smartling chief executive Jack Welde, enterprises generally like handholding and invest in professional translations, so Smartling partners with external translators, who access content in the dashboard. But those can be very expensive and lock out the little guys who make up a good percentage of content on the web.

“It is a great way to reduce the cost of ownership in translation,” said Welde, who estimates that professional translation can be 20 to 25 cents a word. Crowdsourcing can cost nearly nothing.

In essence, small and mid-size businesses approve groups or individuals who volunteer to translate sections of content. The idea isn’t new. In fact, Twitter announced its own crowdsourced translator in February and Facebook offers something similar. But Welde says Smartling has a hook. With Twitter and Facebook’s crowdsourcing, bits and pieces of text needing translating are mailed out to various translators. Sometimes, those bits and pieces will be missing some critical contextual details that are necessary to distinguish between two possible meanings of the same word.

Also, Smartling works for translating things like buttons. If your translated phrase is too long for the button, you can see that and adjust the text as needed. 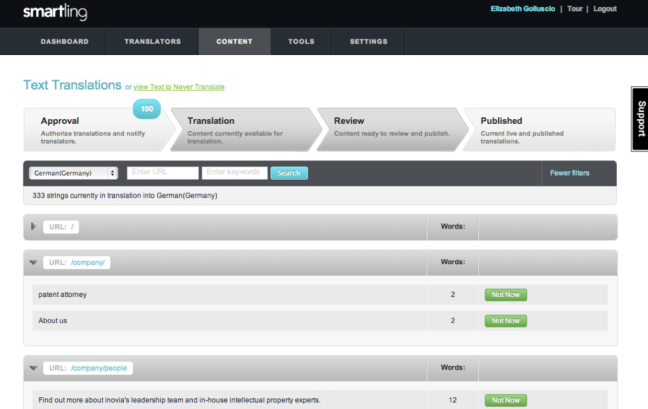 Additionally, websites and apps placed in Smartling become living documents. “We automatically see updates to your site,” explained Welde. A trigger in Smartling then deploys the content to approved translators.

Smartling plans to use its funding to hire more developers, streamline network operations and focus on marketing. “We have to tell two parts of the story,” said Welde, “Whatever size you are, you will benefit from being multilingual. It’s not just for the big kids.”

Currently on the client roster are companies like Survey Monkey, Foursquare, Scribd and others. Being a SaaS company, Smartling only charges based on usage and not on method of translation. Pricing levels start at free, $99/month, $249/month and an undefined enterprise level.

Welde said the company is excited to partner with new investor, IDG Ventures, due to its international publishing experience.

Smartling was founded in 2009 and has 30 employees split between its New York and European offices. The company received a $4 million first round of financing in 2010. Investors to date include Venrock, First Round Capital, U.S. Venture Partners, and IDG Ventures.