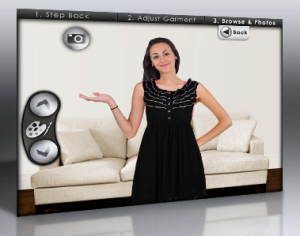 This article is part of a series of posts about DEMO alumni and news of their progress. Zugara launched at DEMO in Spring 2011. Check out more at DEMO.

Something is fundamentally wrong with online shopping, according to Zugara.  The augmented-reality company is one step closer to fixing the problem with the first licensing of its “Webcam Social Shopper” to Banana Flame, a UK-based retail website.

For many, online shopping is just a means to an end. You click, compare, checkout and you’re done. The technology is cut and dry, with the goal of quick comparison shopping ending in an educated sale. But for Zugara, the e-commerce experience is lacking.

The company used augmented reality to create the Webcam Social Shopper (WSS), which Banana Flame recently branded on its site. Shoppers can “try on” clothing and share photos socially to get the “does this dress make my butt look fat?” question answered from home.

In order to bring the fitting room into your living room, you need to have a webcam and a bit of space. Once roughly four to five feet away from the screen, the software detects your body and lays the garment over it.

The experience is reminiscent of the Xbox Kinect. Zugara detects when you wave your hand and automatically increases or decreases the size of the product. After the fitting is complete, you can click the camera button and share away.

But aside from cool factor, why use augmented reality in retail? According to Matt Szymczyk, chief executive of Zugara, it’s a bigger picture problem.

“Augmented reality has been concept videos, people trying to push beyond usability,” he explained. “We are trying to 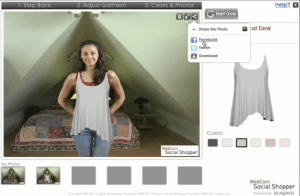 In essence, Zugara feels today’s augmented reality offerings are “pushing boundaries,” but not in a user-friendly way. Instead, the company wants to solve existing problems, as opposed to creating new uses.

Total Immersion, another augmented reality company, recently released crowdsourced music video experience, “My Flipbook,” an  example of innovating for the future, as opposed to problem solving.

Aside from e-commerce, another problem Zugara is tackling is augmented-reality installation.

“What we offer can be integrated in less than a day,” said Szymczyk. “Most augmented reality takes two to four months to integrate.”

The “plug and play” software lives on the site, and is controlled by the site’s owner and not Zugara. This allows the client to brand, customize and, most importantly, trouble shoot on their own. Zugara does offer support, however.

Banana Flame is the first licensed WSS for Zugara. The UK retailer plugged the software in by request, according to Szymczyk, who says the company has seen a lot of inbound inquiries since demo-ing WSS at the DEMO conference in Spring 2011.

“As a business, you don’t come across too many times when you have such a demand for your product,” Szymczyk said. “It’s awesome. It’s overwhelming.”

Szymczyk noted that a lot of Zugara’s traction comes from Europe. Europe tends to be ahead when it comes to e-commerce and is more willing to experiment, he said.

The company, founded by Sony Playstation in 2001, spun off and introduced its augmented reality product in 2009. Since then, the product has also been used by the National Guard to give recruits a preview of their look in uniform.

Zugara currently has nine employees based in Los Angeles, Calif. According to Szymczyk, the company is “beyond bootstrapped” with no current investors.