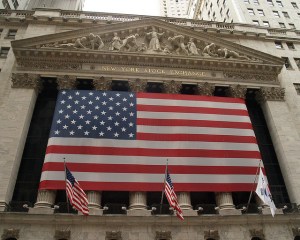 It’s day two of complete market mayhem. Has the chaos closed the window for companies looking to file for an initial public offering?

As of market close, the NASDAQ composite index was down nearly 7 percent for the day. This comes on the first day of trading after market analysis firm Standard & Poor’s downgraded the U.S.’s debt rating, implying that the country is slightly less trustworthy as an investment.

That has sent major tech stocks — and recently minted IPOs — into a tailspin, even more than the rest of the market. Fresh faces on the market like business social network LinkedIn are performing much worse than other tech stocks, which has raised concerns over whether it’s still safe to file for an initial public offering.

“I don’t think anyone has a good answer on that yet, it’s too raw and too new,” Deutsche Bank communications technology analyst Jonathan Goldberg told VentureBeat. “In general, market conditions are going to make it hard for any IPO to come out.”

LinkedIn’s trading debut in June went extremely well, but the company that once had a market cap of more than $10 billion has seen more than $4 billion in value wiped out in three days of trading. The company is now trading at around $80 and has a market cap of $5.6 billion. That’s still well above the valuation of $4 billion it claimed when it priced the shares of its initial public offering between $42 and $45.

“People have very high expectations of growth, with the market looking the way it does, things with high growth tend to get beat up worse,” Goldberg said.

Goldberg said he couldn’t comment on specific IPOs — like upcoming stars Groupon and Zynga — but he said a lot of investors were viewing venture-backed companies as risky and were wiping risk off their portfolios. Each company that has made its trading debut in the past 6 months has seen significant drops of more than 5 percent.

Here’s a quick breakdown of some of the latest tech companies, which have made their trading debuts, that are tripping up amidst the chaos. Each line shows how much the company is down today, as of this writing.

Upcoming IPOs may encounter stronger headwinds given the market conditions. For example, in July Zynga filed to go public, hoping to raise up to $1 billion at an expected valuation between $10 billion and $20 billion. It made around $90 million in 2010 and $11.8 million in the first quarter this year. Despite that strong performance, investors may still prove skittish. Groupon isn’t looking quite as rosy, with significant losses in its first operating year.

It’s now unclear whether the IPO window has closed, and for how long, Goldberg said. That might make the upcoming trading debuts for Zynga and Groupon a little less appealing for investors. It could also scare companies away from going public any time soon, such as discovery site Yelp — which has said it planned to go public sometime later this year.

Tech stocks have typically been able to weather major hits on the stock market. But major tech companies that have a lot of international business are now exposed to market weaknesses thanks to growing concerns in Europe over a mounting debt crisis.

“Most of the big internet names are well diversified geographically, with Google, Amazon, and eBay all having just over 50 percent of sales outside the U.S.,” Macquarie Securities analyst Ben Schachter told VentureBeat. “Typically, this diversification is a positive, but with rising concerns about European macroeconomic issues, these stocks are being penalized.”

Tech bellwethers drops were in line with drops in the Nasdaq and S&P 500. Consumer electronics supergiant Apple fell 6 percent while enterprise tech provider and computer manufacturer Dell was down 7 percent. Online retailer Amazon was down 4 percent while search giant Google was down more than 6 percent.

Chip manufacturer Intel, whose technology is included in a lot of modern electronics, was nearly flat. That’s because consumer spending likely wouldn’t be impacted in the short term thanks to healthy demand for smartphones from the likes of Apple and Google,  Parks Associate analyst Kurt Scherf told VentureBeat.

“Over the short-term, we’re not seeing an impact, since consumer spending is still quite good for areas such as smartphones, tablets, and even more durable goods such as HDTVs,” Scherf said. “It’s what would happen with a spike in interest rates and a longer-term cap on spending that would be worrisome.”

The uncertainty in the market has sent investors fleeing to safer options like U.S. treasuries and gold.

Despite the recent drops, things are still better than they were back in 2008 when the markets initially experienced a broad sell-off, Goldberg said.

“Most of the people I know, they say the economy is terrible but it’s not worse than it was a month ago or six months ago,” Goldberg said. “But anybody who says they know what’s going to happen is lying.”