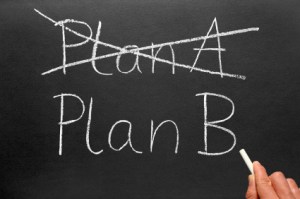 Driving home over the mountains from a Coastal Commission hearing, I had time to ponder an email I received from a city official as the road wound through the Redwood trees. The Coastal Commission had found that a zoning change his city requested didn’t conform to the Coastal Act, and we denied it.

I felt sorry for him because he had put together a project that depended upon the property owner, developer, unions, hotel operator, local neighbors, city council, weather, wind speed, phase of the moon and astrological sign all aligning just to get the project in front of us. It was like herding cats and pushing water uphill.

Reading his email I was sympathetic realizing that if you substituted customers, channel, product development, hiring, board of directors, and fund raising, he was describing a typical day at a startup. I felt real kinship until I got to his last sentence:

“Now we’re screwed because we had no Plan B.”

I had to read his email a few times to let this sink in. I kept thinking, “What do you mean there’s no plan B?” When I shared it with the other commissioners who were public officials, all of them could see that there could have been tons of alternate plans to get a project approved, and there were still several options going forward.  But the mayor just had been so intently focussed on executing a complex Plan A he never considered that he might need a Plan B.

By the time the mountain road unwound into rolling pastures and then flattened into the farmland just south of Silicon Valley, I realized that this was a real-world example of the difference between an entrepreneur and an operating executive.

My formal definition of a startup is a temporary organization in search of a scalable and repeatable business model. Yet if you’ve founded a company you know that regardless of any formal definition, startups are inherently pure chaos. As a founder, keeping your company alive requires you to think creatively and independently because more often than not, conditions on the ground will change so rapidly that any original well-thought-out plan quickly becomes irrelevant. (It’s equally true for startups, war, love and life.)

The reality is that to survive requires a mindset which can quickly separate the crucial from the irrelevant, synthesize the output, and use this intelligence to create islands of order in the all-out chaos of a startup.

To do this you are instinctually creating and testing multiple hypotheses which are creating an infinite number of possible future plans. And when the inevitable happens and some (or all) of your assumptions are wrong, you pivot your model into the next plan and continue forward.  You do this until you find a scalable and repeatable business model or you die by running out of money.

Great entrepreneurs don’t just have a Plan B, they have Plans B through Z.