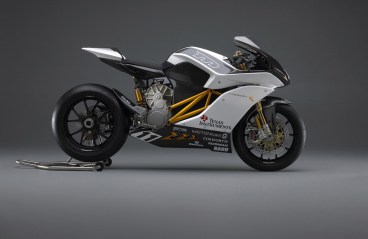 Mission Motors, a manufacturer of electric powertrains that go in electric cars and motorcycles, announced today that it has raised $9 million in its second round of funding.

Mission Motors makes powertrains, which are the drive units for electric cars that include a battery, charging system, inverter, motor, gearbox and associated software. The company then sells those powertrains to original equipment manufacturers like car and bike manufacturers. It has released some prototypes bikes like the Mission R, which set track speed records for electric bikes.

But the company does not manufacture bikes or cars, nor does it have any plans to, Mission Motors chief executive Jit Bhattacharya told VentureBeat. That’s because creating a pure electric car company — like Fisker Automotive and Tesla Motors have done — is a very capital-intensive process. The ante for creating an electric car company is usually around $1 billion, according to Kleiner Perkins Caufield & Byers partner Ray Lane — who invested in Fisker Automotive.

The funding round was led by Warburg Pincus. The company plans to use most of the investment to build out its team and make more commercially-viable products, Bhattacharya said. Since the prototypes have been successful, the company is scouting out hybrid vehicle and electric bike manufacturers and already has some deals in place, he said.

“Our powertrain tech has already been seen in a hybrid car that’s out there,” he said (though he wouldn’t specify which hybrid). “We can fit this technology that we’re developing into a range of applications, from motorcycles to cars.”

Warburg Pincus can invest up to $50 million at any time as part of the deal, according to the company.