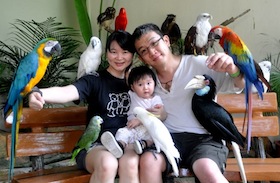 Imagine you’re driving home late at night. It’s very late and you’re exhausted. No one else knows where you are and the roads are dark. Suddenly a deer runs across your path and you swerve, crashing into the trunk of a tree and knocking yourself unconscious.

Under usual circumstances, you might not be discovered or rescued for hours — hours that could be critical. And this is just one example of a high-risk situation where location and timing can make a big difference to personal health and safety. Incidentally, location and timing are two things phones can capitalize on.

This is the core of security tracking application SecQ.me (pronounced “secure me”), the first app made for Android and iPhone by the startup company founded by James “Chen Shiang” Khoo. Different from other safety-oriented panic button apps, SecQ.me also makes it possible for users to respond to danger even if they are unconscious, incapacitated or robbed of their phones.

Here’s how it works: Whenever a user heads into a potentially dangerous situation, they register it as an “event.” Then they provide useful information, like a text or voice message with a taxi’s serial number, a photo of a stranger they happen to be meeting for dinner, and a duration estimate, such as the time it will probably take to go to an ATM around the corner.

Once an event is registered, SecQ.me starts to track the user’s location minute by minute. At the end of the event’s duration, the app will ask the user to confirm his or her safety. If there’s no response, the app will assume the user is in danger and will automatically notify designated emergency contacts via SMS or email. A user can even connect SecQ.me with Twitter and Facebook so that these updates will be posted to their social networks too.

Emergency contacts are able to track the user’s last location via the app’s web portal, and access any attached messages or photos.

The way Khoo describes it, “SecQ.me puts a guardian angel in our user’s pocket that constantly watches over them, triggering for help without requiring any intervention from the user.”

The app was born out of Khoo’s personal experience. About two years ago, his youngest sister got into a minor car accident in a remote area that knocked her unconscious. While she was rescued a half hour later, she was hospitalized for three days before her family found out where she was. This incident, combined with rising crime rates in his home country of Malaysia, inspired Khoo to work on a mobile solution.

While SecQ.me is distinguished by its ability to proactively respond to danger — even if a phone’s battery is dead — it also includes a panic button feature. Users can push a button to alert their emergency network. In the future, people will also be able to trigger this function by vigorously shaking their phones or pushing the button on their Bluetooth headsets.

In the U.S. market, SecQ.me has teamed up with mobile application marketing firm Geniuswave to launch a specific version of the app under the name “Family Watch.” This version will be more family-oriented and is slated to launch in September. In a future iteration, family members will be able to monitor each other and require regular check-ins, in addition to other features.

Still relatively young, the app was one of the top five winners of Sony Ericsson’s 2011 Application Awards. It was also shortlisted by Malaysia 4G operator YTL YES in its Global Developer Challenge. A winner will be announced in the fourth quarter of 2011.

Khoo chose to develop the application for iPhone and Android because the two of them own more than 50 percent of the smartphone market. But he says his startup will consider deploying the app on other platforms, such as Windows Phone and Blackberry, if demand grows to justify the costs. Already, he’s developed a version of the app to run on Sony’s LiveView device (demo here).

“One of the biggest challenges is that users need to cultivate the habit of always pre-registering events with us because emergencies happen when they are least expected,” Khoo says. “If we get funding from either a venture capital fund or an angel investor, we will market our service by running a personal safety campaign encouraging this use of SecQ.me.”

Ultimately, his goal is to make SecQ.me the go-to app for personal safety within three to five years, and plans to invest as much time and energy into its success as he can.

The startup — funded 100 percent by Khoo’s savings for now — is clearly a labor of love, undertaken with his wife Winnie (pictured with daughter and Chief Inspiration Officer Chyenn), who acts as the company’s CFO and COO.

Eventually, Khoo says he’d like to branch out into dating apps (a dream inspired by meeting his wife on Match.com), but he’s not quite ready to delve into that arena yet.