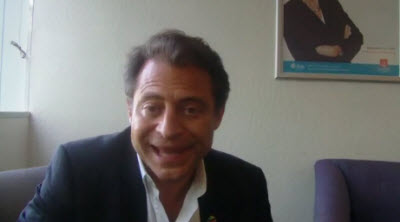 Peter Diamandis, the chairman of Singularity University and head of the X Prize Foundation, says that executives had better be aware of exponential technologies like the rapid advances in chips (Moore’s law), biotechnology, or connectivity so that they can use them to gain a competitive advantage.

“If you’re a CEO of a company and you’re not aware of where these technologies are going, they can literally put you out of business in a snap of a finger,” he said in an interview with VentureBeat at the graduation ceremony of the latest class of Singularity University. “Or, you can use them to leapfrog your competition.”

Diamandis started Singularity University with futurist Ray Kurzweil in 2007 and the program trains as many as 80 student entrepreneurs at the NASA Ames research center to create businesses that can affect a billion people.  It sounds like a huge goal, but Diamandis says it’s more inspirational than intimidating.

“We are making it clear you can do these things,” he said. “There are people who have huge needs. These technologies empower a small group to do what only governments and large corporations could have ever done” in the past.

Here’s our video with Diamandis.