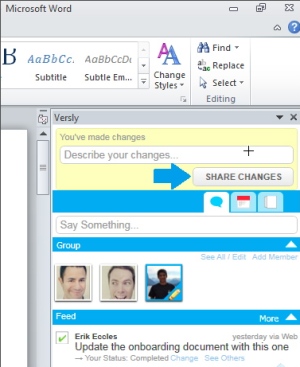 Rob Salvagno, VP of corporate development at Cisco, told VentureBeat that the company was interested in Versly not only for its Office collaboration software but also its strong team. Versly’s roster includes Benjamin Renaud who previously an executive at BEA and Sun; Erik Eccles who previously worked at Yahoo and Jumpcut; and Patrick Linkskey who was founder and CTO of SolarMetric.

“While the Versly team is only 10 people, we’re happy to have these veteran software developers on board,” Salvagno said. “Some of these folks were part of the early days of Java development and we think they will add a lot.”

On top of Office-based collaboration, a secondary aspect the Versly team could help Cisco with is developing collaboration solutions for content management.

“It’s not our number one priority, but there is potential in having the Versly team look at content management collaboration services,” Salvagno said.