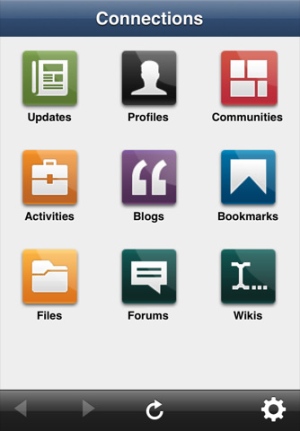 The apps, for iOS, Android and BlackBerry, plug in enterprise users and their customers so they can access things like blogs, employee data, status updates, wikis, videos and photos. Ideally, enterprises that use Connections will have an edge when it comes to collaboration and unified communication solutions.

The IBM Connections software was previously known as Lotus Connections and has been around in some form since 2007. Actively moving the service into the mobile sphere makes sense as more executives, managers and general employees need to make decisions, crowdsource ideas and get answers on the go.

There’s also added functionality on each smartphone platform, with additional apps that support Connections. On the iOS version of IBM Lotus Notes, there’s a “partial wipe” ability that lets IT administrators wipe just confidential company data from an iPhone or iPad while keeping a worker’s photos, videos and contacts. For BlackBerry, users can actively participate in online meetings using the IBM Sametime app if they choose.

On the Android version of Lotus Notes Traveler, there’s a click-to-call ability tied into the operating system’s calendar. Android also has IBM’s Sametime app, which creates a unified communications feature so users can take advantage of text-to-speech and instant messaging functions. And cloud-based meeting support is planned to be available later this year on Android with the LotusLive Meetings app.

The three Connections apps can be immediately downloaded from their respective app stores, while Lotus Notes Traveler is on all platforms and IBM Sametime is available now for BlackBerry devices.

Are you a user of IBM Connections? What do you think of its service?