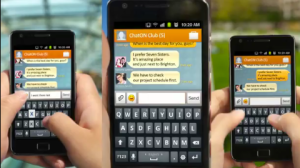 Samsung is getting ready to launch a new mobile messaging service called ChatON.

The app is essentially a group chat app that combines texts, images and video messaging from Samsung’s Bada OS,  iOS, Android and BlackBerry.

But with the multitude of other group messaging options available to users (Research In Motion’s BlackBerry Messenger and  Facebook’s new messenger app in particular) it’s unclear if ChatON will ever take off.

Samsung’s new chat service is scheduled to debut at the IFA consumer electronics trade show in Berlin, Germany, the first week of September.

ChatON will be available in two versions. The first is geared toward feature phones while the second is a more complex version that lets smartphone users do things like commenting profiles, send animated messages and display the contacts they message the most.

Samsung said it also plans to release a ChatON version for the web, which would bring similar group chatting functionality to PCs.

We’ve embedded Samsung’s demo video below. Let us know in the comments if you’re excited about the app and plan on using it.