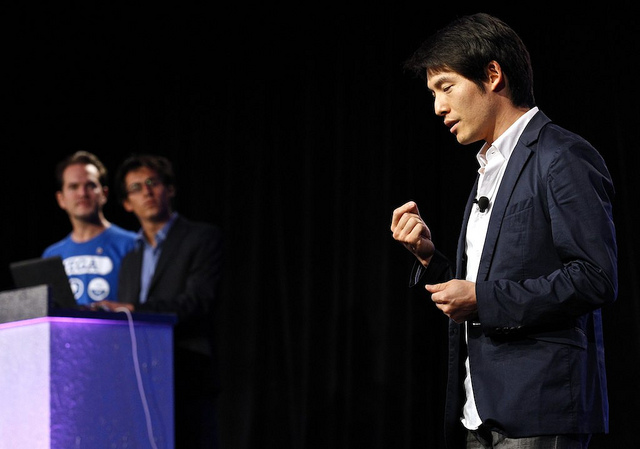 One week ago, AdGame didn’t exist. Today, the company has a customer, a little bit of funding, and the attention of a crowd full of potential investors and partners.

The idea is to make web display ads into incentivized, educational quizzes that not only engage the viewer, but also teach them the kind of facts that would be helpful on a standardized test. 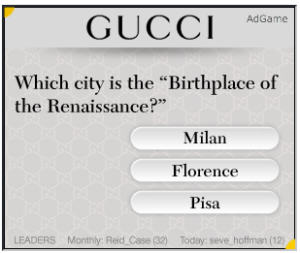 For example, a test ad for Gucci asks, “Which city is the ‘Birthplace of the Renaissance?'” The multiple choice quiz below the question lets you choose between Milan, Florence and Rome. If you answer correctly, the ad tells you that Florence was also the birthplace of Gucci. Answer enough questions correctly, and you could qualify for a discount.

“It’s not about punching the monkey or guessing which picture is J. Lo’s ass,” said entrepreneur Tony Young Lyu, who demonstrated his technology today at Demo Fall 2011 in Silicon Valley.

“If you know you get a discount at the next level, I can guarantee you’ll be looking out for that ad.” You might even be motivated to return to sites that carry the ad, like VentureBeat.com or NYTimes.com.

“We’ve just reversed the primary relationship. The ad has become the primary attractor to a website,” Lyu said.

What’s more, Lyu said, in initial tests people’s recall of an ad’s content — both the educational part as well as the brand name — was very high. 90 percent of those who saw an AdGame ad remembered both aspects several hours later.

Lyu is one of five cofounders involved in the company. It was founded during Mega Startup Weekend on September 9. Startup Weekend is a sort of hackathon/business plan competition that happens in a variety of cities around the world. The Silicon Valley one was one of the largest, with an estimated 300 entrepreneurs participating. During each weekend, entrepreneurs make pitches to one another, vote on which ones to pursue, code up prototypes, and present their “finished” prototypes at the end of the weekend.

“I got the idea literally five minutes before my pitch,” said Lyu.

Something must have clicked, because Lyu’s idea made it through several stages that weekend and wound up getting coded, tested, and elected as one of three finalists at the end of the weekend. He says it even got its first round of funding: One of the Startup Weekend judges emptied his wallet to “invest” all his spare cash in the company.

From among the finalists, judges picked AdGame to make a presentation on the final day of Demo.

Lyu is not a newbie to business: He’s an entrepreneur in Korea, with a company aimed at helping crowdsource funding for projects and a nonprofit that helps entrepreneurs. He spent the summer in the U.S. leading a team project at Singularity University, and went to Startup Weekend shortly before he was due to return home. Because he won, he wound up missing his return flight, and is now considering staying in the U.S. to help his company take off. The founders are looking for funding, partners and customers.

But they already have one customer: A company they met at Startup Weekend has signed on to use the ads.

Lyu is a natural presenter with a low-key but compelling manner. He described how he came up with the idea for the company based on the Startup Weekend themes of education, gaming and advertising.

And his idea clearly pleased the crowd at Demo. When he wrapped up his presentation, Lyu got one of the biggest applause lines of the whole conference.

See below for a video shot at Demo’s Startup America HD Lounge, with Lyu and cofounder Gaia Constantino of AdGame.