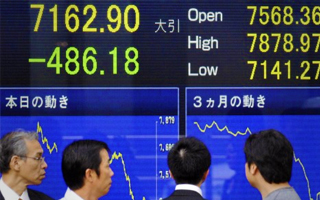 In the past several months, more and more venture-backed companies have shied away from tumultuous U.S. market activity and have sought entry into in European and Asian exchanges instead.

According to new data from Dow Jones’ VentureSource, exactly half of the companies that completed an IPO in the third quarter did so in Asian and European markets.

“Countries with the best rule of law, the best bankruptcy protection, the freest trade, the freest markets, and the best credit ratings are the countries that rule the day,” Draper Fisher Jurvetson partner Tim Draper told VentureBeat during the recent Q3 stock market slide. “The U.S. just dropped a notch.”

At the time, some of us thought Draper’s pronouncements slightly melodramatically bleak, but it now seems that quite a few CFOs saw the situation in the same light.

In Q3 2011, five out of ten IPOs for venture-backed U.S. companies took place outside the United States. This statistic represents a huge drop in the number of U.S. market entries from the first half of 2011, when all 25 venture companies that went public listed on the U.S. market.

“I am frustrated that America is in the process of falling behind Asia,” Google chairman Eric Schmidt said shortly after the U.S. credit downgrade. “I was recently in Asia and the Asian view of America is that we are the past.”

The number of companies with U.S. IPOs was down 77 percent from the second quarter 2011 and 64 percent year over year according to the Exit Poll report by Thomson Reuters and the National Venture Capital Association (NVCA).

Overall, IPO activity has slowed in the third quarter, with venture-backed companies citing market volatility as a concern. Most of the quarter’s exits happened early on, before the U.S. market in particular became unstable in early August. Six companies made their initial public offerings in July; however, just four companies had IPOs throughout both August and September.

In addition to foreign exits, the market volatility also led to a record number of IPO delays beginning in mid-August.

The closing of the IPO window followed agency Standard & Poor’s downgrading of the U.S. credit rating from AAA to AA and the subsequent stock market slide. As a result, around 83% of scheduled IPOs during the first week of unfavorable market activity — between 9 and 13 events, depending on which sources you consult — were delayed or postponed, some indefinitely.

“Federal policymakers must address this market uncertainty if they want to fulfill the stated goal of increasing long term employment as it is these emerging growth companies that hold the key to future job creation in the United States,” said NVCA president Mark Heesen in a release.

Currently, 61 U.S. venture-backed companies are in IPO registration. Twenty-seven of those companies filed during the third quarter.

“Exiting a venture-backed company in today’s market requires patience,” said Jessica Canning, a VentureSource global research director. “Cash-rich corporations will continue to spend cautiously until the global markets stabilize enough to provide assurance that their cash on hand is an unnecessary security blanket. Meanwhile, IPO candidates continue to file with hopes that the markets will stabilize or that they can find an exit overseas.”

Of the U.S. IPOs in Q3, four of the five were from companies in the technology sector. Thompson Reuters said this makes tech the most active sector in terms of IPOs; IT had fourteen IPOs of the 21 IPO exits in Q2, also.