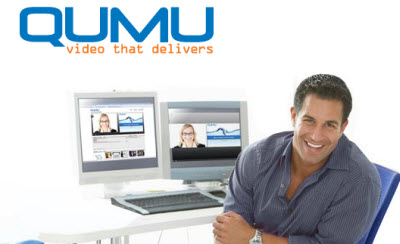 Moving into enterprise video communications, on-demand disk publisher Rimage has agreed to acquire Qumu for $52 million in cash and stock.

The deal gives publicly traded Rimage a foothold in the fast-growing video communications market for enterprises. In the deal, Rimage will pick up more than 100 companies as clients in the ranks of the Global 1,000. The deal is expected to close in the next day.

Rimage distributes on-demand media on Blu-ray disks, CDs and DVDs. With Qumu, it can also distribute that on-demand content to any mobile or desktop device. For example, Rimage takes video taken by surveillance cameras and publishes it to discs. With this new acquisition, it can publish that video to smartphones or the web as needed.

Sherman Black, chief executive of Rimage in Minneapolis, said in an interview the Qumu acquisition is a “cornerstone” deal for his company as video communicaitons and social applications become more popular in businesses.

“We started an organic effort in this space but found a way to accelerate that with Qumu,” Black said. “We now have a publishing platform that is bigger than any others out there.”

Qumu helps corporations create, manage, and securely distribute video and related content. Its customers are in the banking, technology, telecommunications, university, and government markets. It sells its products direct to companies as well as through partners Sony and AT&T.

Qumu’s revenue has increased more than 45 percent a year for the past three years. In 2010, it generated $10.3 million in revenue and it is on track to hit $15 million in 2011. The company is targeting $21 million in revenue in 2012. Rimage hopes to take Qumu into new markets faster than Qumu could do on its own. Ray Hood, chief executive of Qumu in San Bruno, Calif., will remain the leader of the Qumu team and become a senior vice president at Rimage. In an interview, Hood said the company operates a federated content delivery network and competes with Cisco, Polycom, Vbrick, Sonic Foundry and others.

“We’re like Netflix, Hulu and YouTube for the enterprise,” Hood said. “We make the video secure and targetable to the right employees.”

Rimage said it will increase its cash dividend in the fourth quarter to 17 cents a share, which is up 70 percent. Rimage expects to increase revenues by double digits in 2012. For 2011, Rimage expects revenues of $86 million to $88 million and earnings per share of 42 cents to 45 cents.

Black said the company is launching its own “push-based delivery platform” in the future. That is equivalent to iTunes for enterprises. Rimage was founded in 1978 and went public years ago. It has 180 employees. Qumu was originally started as eScene Networks. It was acquired by Inktomi, which was then bought by Yahoo. Qumu’s current founders bought the company back from Yahoo and it now has 55 employees.