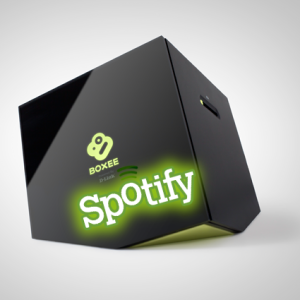 Joining streaming music services such as Last.fm and Pandora, Spotify has launched an app for the Boxee Box, the company announced Friday.

The Boxee Box is a streaming set-top box featuring Boxee’s open-source media software, which transforms televisions into internet connected media centers.  The new Spotify Boxee app signals that the company is pushing beyond desktop and mobile devices and is giving users access to the service in their living rooms (or wherever they watch TV).

Users don’t need the Boxee set-top box (just a device running the software) to gain access to Spotify, but they will need to be premium Spotify subscribers to take advantage of the new app. The app gives subscribers access to the Spotify catalog of music and all personal playlists.

One thing users won’t be able to do is edit their Spotify playlists, which is something people might take issue with, according to Boxee VP of Marketing Andrew Kippen.

“There’s bound to be people who aren’t as happy that you can’t edit playlists or do searches on the app. But, we really wanted to train them to realize that they shouldn’t be doing that stuff on their TV anyways,” Kippen said. I have to agree with him, especially since its not very difficult to get up, sign on to Spotify, make changes and then resume enjoying your music. Boxee is, of course, intended as a passive way to consume media — much in the way you currently watch cable TV.

The company said the new Boxee Spotify App should be available now, but I’m still not seeing it populate in the list of newly released apps. Kippen advised Boxee users to try signing out of their accounts and then back in again, which should make Spotify pop up in the list of featured apps.

Spotify, which only launched in the U.S. in July, has lots of catching up to do in regards to adding access to other devices and platforms. Competitors like Last.fm and Pandora are already available on hundreds of other platforms.