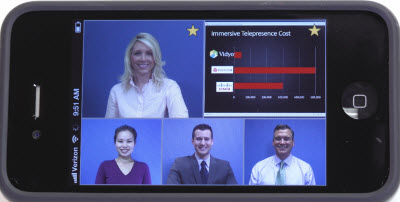 The Hackensack, N.J.-based company creates telepresence software that allows people to hold high-quality video conferences even if some participants are using portable hardware.

The company is now launching its VidyoMobile app for the iPhone 4S and it has demoed a video conference with four users sharing content on Apple’s latest smartphone. Vidyo taps the stronger A5 processor of the iPhone 4S to deliver high-quality video imagery, just as it does on the iPad 2. With the app, you can enlarge an image of a given participant via pinch and zoom controls on the touchscreen.

This means that users can participate in a video conference even if they’re on the road or working remotely. The app is now available in the App Store. VidyoMobile allows users to participate in conferences with more than 100 users, with the ability to display four participants on the phone screen at any given time on the iPad 2 and the iPhone 4S.

Vidyo has raised a lot of money recently, including a $22.5 million fourth round of funding in September.