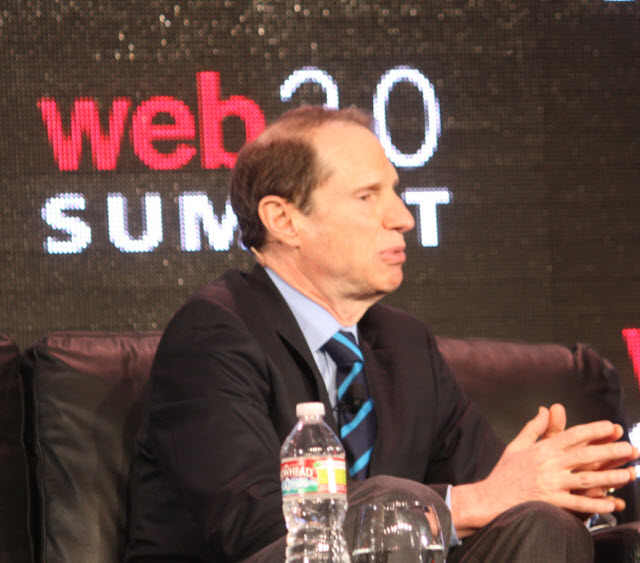 Hopefully, the days are long gone when a U.S. Senator could get away with saying the internet “is a series of tubes.” Ron Wyden, the Democratic U.S. Senator from Oregon, tried to put that image behind him as he became the first politician to talk on stage at the Web 2.0 Summit in San Francisco on Monday.

John Heileman, a writer for New York Magazine and author of the bestselling book Game Change on the 2008 presidential campaign, introduced Wyden as a “devoted member of the internet caucus” and, in 1995, when he was in the House of Representatives, the lone politician who was able to carve out a safe harbor for “user-generated content” in the once-feared, censorship-friendly Communications Decency Act. He got a round of applause from the room for that. Essentially, Wyden is a champion of privacy, liberty, and innovation at a time when fear is driving limitations on these matters.

Does Washington get it?

“Things have changed tremendously” in Washington D.C., when it comes to politicians knowing something about the internet, Wyden said. “If you want to keep up with your kids, you have to know about tweeting and smartphones. We have issues to deal with. Members of Congress are now much more reluctant to speak out in informal settings because they worry someone will hold out a cellphone and record everything they have to say.”

Heileman asserted that money from certain industries, such as the content industry, influences the way politicians vote in ways that restrict innovation.

“One of the reasons I wanted to come today is that social media needs to understand what the threat is with some of these policies,” he said. “We’re going to have to fight back.”

Wyden said the Protect IP bill proposed by Sen. Patrick Leahy (D-Vt.) is a big threat to the innovation sector.

“It is a question whether one part of our economy, content, can use government as a club to go after another part of our economy, which is the innovation sector and everything the internet represents,” he said. “It’s about whether you will have arbitrary seizure of domains, whether you will have vague standards that let you go in and seize domains, and ceding a significant portion of the authority over the internet to private companies. I have put a hold on this resolution.”

Wyden said the legislation would put restrictions on freedom and innovation, and that shouldn’t happen during tough times. Wyden also shot down an anti-counterfeiting bill last year, the proposed COICA bill, for Combating Online Infringement and Counterfeits Act.

“This would have set off a cluster bomb when you should use a laser, and the collateral damage to innovation and freedom” would have been bad, he said. “It would have even hurt the ability to link from one item to another and put even good hackers in jeopardy for doing experiments.

“I see the internet as the shipping lane of the 21st century,” he said. “I will do everything I can to fight off efforts to wall off the internet. That’s the net neutrality issue,” a reference to whether internet service providers or governments can restrict consumers’ access to networks that connect to the internet. He wants a free and open architecture to enable innovation.

Wyden said that he wished that the Obama administration could have gone further with its net neutrality solution, which left out mobile networks. He suggested the tech industry fight back.

“By and large, folks in tech pretty much view politics as root canal work,” he said. “People do not like getting involved in the nuts and bolts of politics. The future of social media is involved.”

Wyden admitted, “I’m at the point in technology where I know what I don’t know. That is why I have a team of crackerjack 24-year-olds and 25-year-olds to help me through this.” But he said the decisions that Congress made in protecting intermediaries 15 years ago with the Communications Decency Act enabled the growth of the internet in the U.S.

Wyden and U.S. Representative Jason Chaffetz (R-Utah) have also proposed the Geolocation Privacy and Surveillance Act, which makes it illegal to track the location of people without first getting their permission or a search warrant.

“Most Americans don’t know that governments and companies can track them without any rules of the road,” he said. “We are saying, let’s start with something simple, applying the Fourth Amendment to protect people from unreasonable search and seizures.” He said such a bill requiring warrants before doing such tracking is long overdue.

Wyden has also been critical of the Administration’s secret interpretation of the Patriot Act law regarding warrantless wiretapping. That interpretation is classified, and Wyden, who serves on the intelligence committee in the Senate, said that information should be available to the public.

“It is the secret interpretation that the executive branch uses to offer up their belief about the interpretation of the Patriot Act” and whether it allows the government to conduct wiretapping without a warrant. The New York Times has sued to get that interpretation de-classified.

Too often, the government says that you can’t have both privacy and security at the same time. “I don’t buy that at all,” Wyden said. “I do not think these are mutually exclusive.”

Regarding concerns about entrepreneurship being in decline, Wyden said he is worried about that and that the government should focus on fixing this problem in order to attack the structural unemployment in the economy.

“Right at the heart is what we do to promote legislation,” he said.

He wants to extend tax havens for internet companies to digital goods in order to promote innovation. He said it remains important to revise immigration laws to allow people who are studying technology or creating companies to come to the country and get on the path toward citizenship.