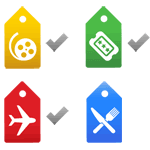 Google Offers is expanding its selection to include a number of new partners, Google announced today in an official blog post.

There are two ways to run a deals business. You can build a dedicated sales force and seek out willing businesses who want to run a deal with you. But it takes a lot of time, effort, and financial dedication to successfully locate and convince business owners their deal will go far. Because deals are so hyper-local, it also takes a large knowledge base or team to know who to contact. Indeed, big names like Facebook and Yelp had to scale back or close down deals operations altogether.

In order to combat this expense and the big potential for failure, some players in the deals space have instead opted to aggregate deals from other deals sites.

Now, it seems, there is a third, hybrid option, which Google is taking: partnering while conducting its own business. 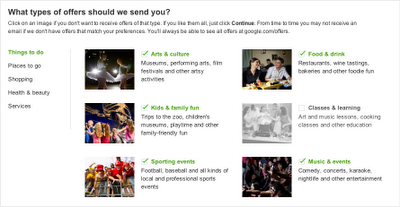 So in addition to the deals its generated on its own, Google offering deals from partners, including family-specific deals, outdoor adventure sports, high-end products and experiences, classes and more. Without the partners, Google would be hard-pressed to expand so quickly. But with new verticals and broader offerings, the company must also combat deals-spam, which it is doing with a personalization quiz.

The idea is to help Google understand what kind of deals you like, so you are not as quick to toss a Google Offers email in the trash. The quiz will allow you to tell Google where you hang out and what categories most interest you, with the option to change and update these preferences later.

In order to flesh out Google Offers, the company has also been busy acquiring deals businesses around it such as DailyDeal and The Dealmap, which Google said was directly influential in these new partnerships. Google’s quarterly report released on Wednesday also showed the company bought German deals site DailyDeal for $114 million.

The new deals will be available in San Francisco, Calif., first and will gradually roll out to more cities.