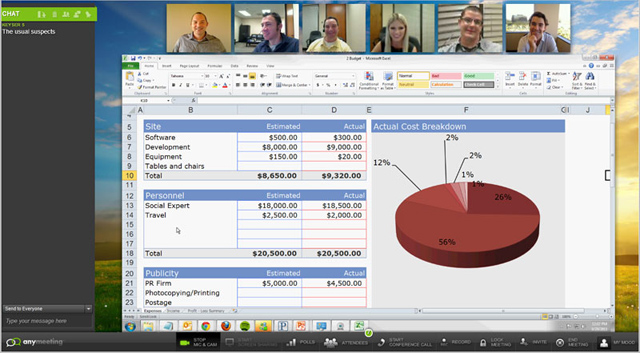 Online meeting startup AnyMeeting has added premium ad-free options to its service, a major milestone for the service because its meetings have been run with contextual advertising up until today.

I’ve been critical of AnyMeeting before because if I was giving an online presentation to prospective clients or my colleagues, I wouldn’t want contextual advertising on the side. But finally, with paid ad-free meetings, AnyMeeting has a disruptive offering that can compete (and undercut) online meeting leaders like Cisco’s WebEx and Citrix’s GoToMeeting.

Asked about competing with recent meeting startups like MeetingBurner or Vidquik that offer free online meetings without advertising, AnyMeeting CEO Costin Tuculescu told VentureBeat that startups like these don’t have a sustainable business model and businesses can’t rely on them.

“We’re offering full transparency with our business,” Tuculescu said. “The free version has ads and the paid version doesn’t. It makes business sense and the customer doesn’t have to worry about their meeting company pulling a bait and switch on them.”

AnyMeeting has had surprising traction given that the service has been completely ad-based up to this point. Under its ad-supported model, AnyMeeting has seen an astounding 875% user growth during the past 12 months. Tuculescu said the company has 75,000 registered users and that its users have spent 750,000 hours on meetings in the past year.

Huntington Beach, Calif.-based AnyMeeting was founded in 2009 and has seen $780,000 in investments thus far from Tech Coast Angels, Pasadena Angels and Maverick Angels. Tuculescu said the company is also looking to raise more funding in Q1 2012.