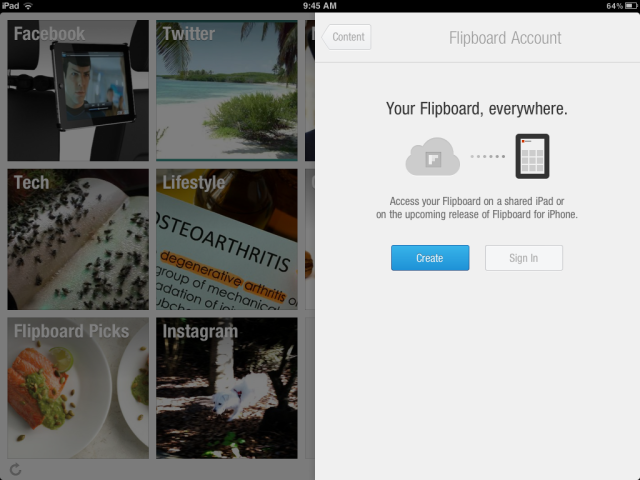 Flipboard, the social magazine for the iPad, came out with an update today that brings Tumblr and 500px integration to the application. More importantly, the new app includes user accounts, which will let multiple family members log on from a single device and will let users view their account from the company’s promised iPhone app.

The accounts feature finally makes Flipboard for iPad a family-friendly application, since multiple users can now log and see their own magazines from the same iPad. But just how soon can we expect the promised iPhone application? “We don’t have a date set yet, but we’re getting close,” a company spokesperson told VentureBeat.

On the content side, the startup has added trendy social network Tumblr to the mix. Flipboard users can create a new section to flip through friends’ updates or add sections for each of their favorite Tumblr sites. Application users can, of course, re-blog posts just as they would via Tumblr.

500px, an emerging online community for professional and hobby photographers, has also received the Flipboard treatment. The new application will feature top 500x photo streams via the content guide.

Thursday’s updates come at an important time for the young startup. Flipboard has plenty of fellow startup challengers all vying for the title of top social magazine, but now industry heavyweights are attempting to take back the digital news reader’s attention with tablet applications that merge social features and rich media content. Yahoo recently released Livestand for iPad (which has user accounts), for instance, and Google is rumored to be releasing an application called Propeller in the near future.

Flipboard for iPad version 1.6 is now available on the App Store.