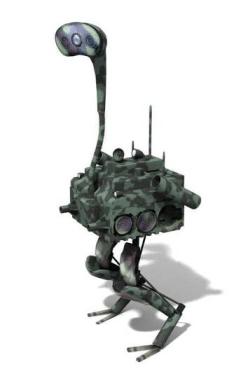 While the long-necked flightless ostrich is a puzzling and often humorous creature, the Department of Defense’s thinks it’s the perfect design for a robotic “terror bird” that will help protect human soldiers in combat when it is completed, according to The Register.

Dubbed “FastRunner,” the prototype is being developed by two teams of scientists at the Florida Institute for Human and Machine Cognition (IHMC) and MIT. The project statement from DARPA (the research and special projects wing of the Department of Defense that brought us the Internet) is to design a bipedal robot that can run 20 miles per hour on a flat surface, and maintain a pace of 10 miles per hour on choppy broken ground or hills to identify enemy combatants, hidden munitions or other threats to human soldiers.

“Having just two legs, the robot is lighter and simpler … than a four-legged machine,” Sebastien Cotton of the IHMC told The Register. “There’s also more flexibility … a two-legged robot can get through narrower spaces. That said, the same leg design could work for robots with four legs or more.”

The robot is expected to weigh about 66 pounds, according to Gizmag, and stand 4.59 feet (1.4 meters), which is slightly smaller than a mid-sized adult male ostrich, and roughly half the size of a large specimen.

Working with computer simulators, the teams have more than 70 percent of FastRunner’s first leg designed. Once built, the robotic ostrich could carry out surveillance and reconnaissance and search and rescue missions where human soldiers might be at risk. And unlike the real ostrich, this bird will never hide its head in the sand.